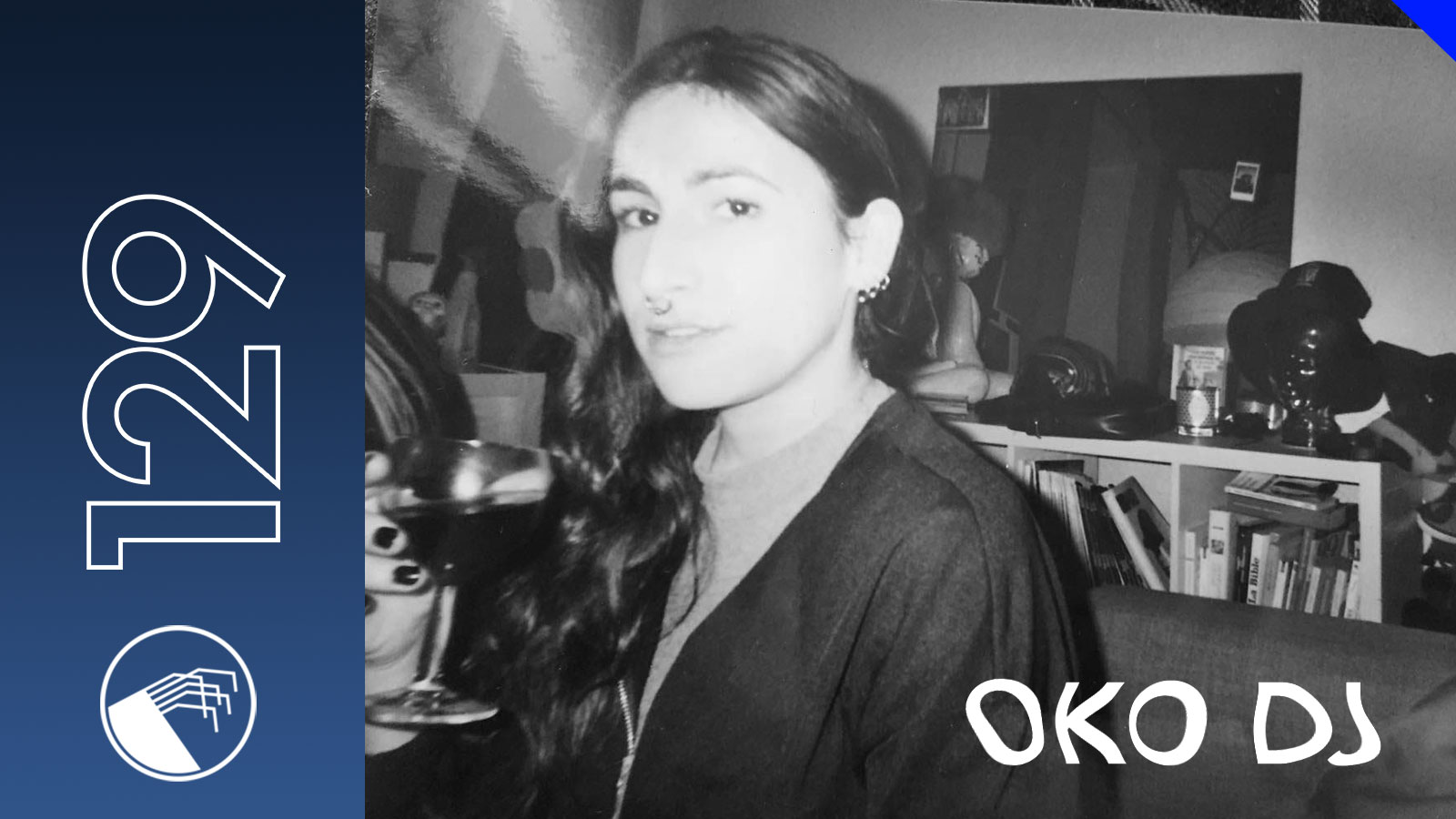 One of the best-sounding adventures during DT Camp 2017, an insanely good gathering somewhere in Lithuania, was meeting OKO DJ (Marine Tordjmann). The French artist is in charge of the Paris department of LYL radio, one of my favourite stations ever. Neither in her radio shows called Pu$$y Nightmare (yes, women are in charge here) nor in her club sets she allows any prejudice regarding her music. Open to the world, nature and the people, OKO DJ delivered one of the finest morning sets ever this last Sunday, which was much more of a ritual travel than your regular club mix. It's a pity it wasn't recorded but I am pretty sure I'll bump into Marine soon. Before that, here's our letters and words b2b session.

DT: Did radio shape your musical taste when you were growing up?

MT: For sure, as radio was one of the only way I was listening to music. We used to commute to and from school, as I was living in the countryside and going to school in Paris, and I used to listen a lot to this French radio station focusing on rap and r&b called Skyrock, and that sure had a big influence of my tastes today.

DT: What plans for yourself did you have when you were 7, and then when you were 18? What did you major in the university? When did it all start to focus purely on music?

MT: At 7 I wanted to be a professional horse-rider, which I almost became. I was doing horse-riding on a professional junior level from my 10 to my 17 years old; all my life was only about horse-riding actually, I didn't go to parties, I almost didn't have time to do anything that wasn't related to horses for 10 years basically. Then when I was 18, I was in the middle of a two years long preparation for the entrance exam to Business Schools in France, which are really hard to get in. As I was almost always the first in class during and before high school and didn't have time to think about what I wanted to study because I was too busy with horse-riding and other activities (piano and judo to mention them) , my parents and my grades chose for me in a way. I now have two masters in the management field.
I did various jobs after that, the latest being working in a French sound design agency, which actually composed some of the most famous brands' audio logos. I'm sure almost everyone can sing those 4 notes you can hear in the French train station! Even though that was a really interesting job, I still felt I wasn't exactly in my place so I decided to quit and took some time to think about what exactly could fulfil me. In this time, I got the proposal to open the Paris department of LYL radio, of which I'm still in charge today, and more and more gigs started to happen, both via Bruits de la Passion and solo. Today I'm only working in music, and for now I could barely imagine myself doing something completely different. I am passionate about what I do and really grateful for that.

DT: Do you feel grown-up?

MT: Yes and no. In the past years, I changed quite a lot of things in my life and in the way I see myself: food, relationships with others, energies, etc. For example, yoga is part of my everyday life and I am vegetarian, I meditate regularly and all these changes have lead me to being healthier both mentally and physically. I know what energies are positive and tend to be more and more accurate when it comes to drawing what does good to me and to the people I love. I can now say that I am (almost completely) at peace with myself and with the world that surrounds me. On the other hand, I am still young and have a long way to go to be the best version of myself, and learning is a never-ending process so I would rather say that I feel growing up than grown-up. I also meet so many incredible people all the time that I keep learning and getting inspired by them, I guess that's also part of growing up!

DT: When and how did you realise electronic music is pretty much a boys club - I am asking this because I have read your radio show as a direct objection to that and one of the ways to change the club. Was it your personal experience or events not related to you?

MT: Electronic music being dominated by men is something I realized very early: the first time I put a record on a turntable, which was in a record shop, I felt it. Even though I was lucky to have great friends surrounding me in music and supporting me, it was hard to make my voice heard in the beginning, and it takes quite a long time before people take you seriously, too often because you're a girl. Nowadays, I very rarely have any problems related to being a woman in music, probably mainly because the music sphere in which I evolve is full of conscious and intelligent people, aware of these questions. However, I still have some bad experiences sometimes, but it's not worth talking about it, I'd rather focus on the positive experiences.

DT: Programming a station seems like hell of a job. How do you balance between replying to requests to do shows on LYL and digging for interesting people/crews and inviting them to do the shows?

MT: There is no rule; we consider all the proposals we receive. The idea when programming something on LYL is to keep in mind that we want to offer a wide range of programs, in order to be representative of Paris music scene. Therefore, our hosts in Paris vary from label bosses, djs, record store owners, scholars, promoters, musicians, producers and independent persons, each of them being active within the musical scene and representing pretty much all the genres existing, from classical musical to trap, via electro-acoustic, Caribbean folk or hip-hop... always maintaining high-quality standards.
In addition to that, over two years, we got to about 100 regular programs (residents) produced in Lyon and Paris reaching in January our aim to have a fully occupied grid of live shows broadcasted from Tuesdays to Saturdays, from 2 to 10pm. September will see the addition of a nice number of new shows, that we are already announcing everyday on our Facebook. Most of these shows will be produced outside of our physical studios just as it's happening in our present schedule, with the beginning of residencies of persons and labels we dig, like Waving Hands, Klasse Wrecks, Shelter Press, Early Sounds Recordings, Entr'acte, Holywax, Emotional, DJ Okapi and many more... Each one of us in the team proposed some new shows this summer, and we then decided together which the most interesting ones to broadcast. So programming is a mix of answers to the proposals, ideas and proposals from the LYL team itself and nice encounters along the way.

DT: What are the shows you are most proud of and always listen to the episodes?

MT: They are a great number of amazing shows that were broadcasted on LYL, it would be too hard to pick a few.
But regarding my shows, as they are obviously the ones I know best, I guess it's this Pu$$y Nightmare episode I did along with DJ Alizee, this obscure guest who joined me for a 2 hours B2B. I think it's the most complex and futuristic show I did, and the story telling is really interesting. In my opinion, this show somehow manages to find perfect balance and harmony through a very wide range of music, and some pretty chaotic tracks. Also, it happens that this DJ Alizee is someone really special to me and of course that matters a lot when it comes to music symbiosis. Worth checking out if you're ready to space out.

DT: How has working on LYL influenced your career? Do you get certain bookings because you have a show there?

MT: Since the Paris Department of LYL radio is pretty recent, it's still a bit hard to tell for me, but being the head of LYL Paris sure has an influence on the legitimacy I have in music. Also, I'm sure that hosting a female-only radio show surely had an influence on getting some bookings in "feminist" orientated festivals or events.

DT: I saw you played in the Comme Nous Brulons festival in Paris, celebrating queer and feminist culture. How was it?

MT: It was amazing, the festival lasted a few days, and there was a lot more than only music going on: visual arts and performances, experimental projections, workshops, etc. The night I played, I was the only DJ, the other 3 acts were live bands; this is something I like, to play in a night of live acts, it's a totally different approach that playing in a club along with other DJs. I got invited by this feminist crew, La Brigade Du Stupre. Finally, I met Las Kellies, a girls band from Argentina, we really got along and liked each other's music, so they gave me their record at the end of my set, which I'm delighted to have, it's an amazing record and I play it often. I'm really glad we met and this festival allowed many encounters such as this one.

DT: Travelling around and performing a lot; is it easy to maintain friendships that are born during gigs? Is your friend circle international and do you think it influences your DJ career in any way; I mean sharing music and being in same promo lists with artists you know and like?

MT: I meet a lot of very nice people and we often have the chance to meet again in other gigs, so the friendship is not so hard to maintain, plus with facebook it's easy to keep in touch. I'm pretty sure that getting along really well with someone with another country has an influence on where you can get invited next, and I love that. But I don't really like to analyse this, it's only about being natural and true with the people you love, and I guess everyone can feel when you're honest and having fun.

DT: One more aspect of a DJ before we go. How important for you is the factor of uniqueness? Do you stop playing tracks when they get played around too much? What about the balance between old and new?

MT: To me, uniqueness comes more from the mindset and the way you put tracks together than from selecting very underground and unknown tracks, I don't consider myself as a "crate-digger". I just play what I like and what moves me, and what I think can touch the crowd in a precise moment. As for the balance between old and new, it's not something I pay attention to, and as I play a very wide range of music, it naturally goes from early electronics (50s, 60s) to nowadays music. For instance I checked in my DT mix, and it goes from 1978 to nowadays unreleased stuff!

This interview was originally published on Daina Dubauskaite's blog.