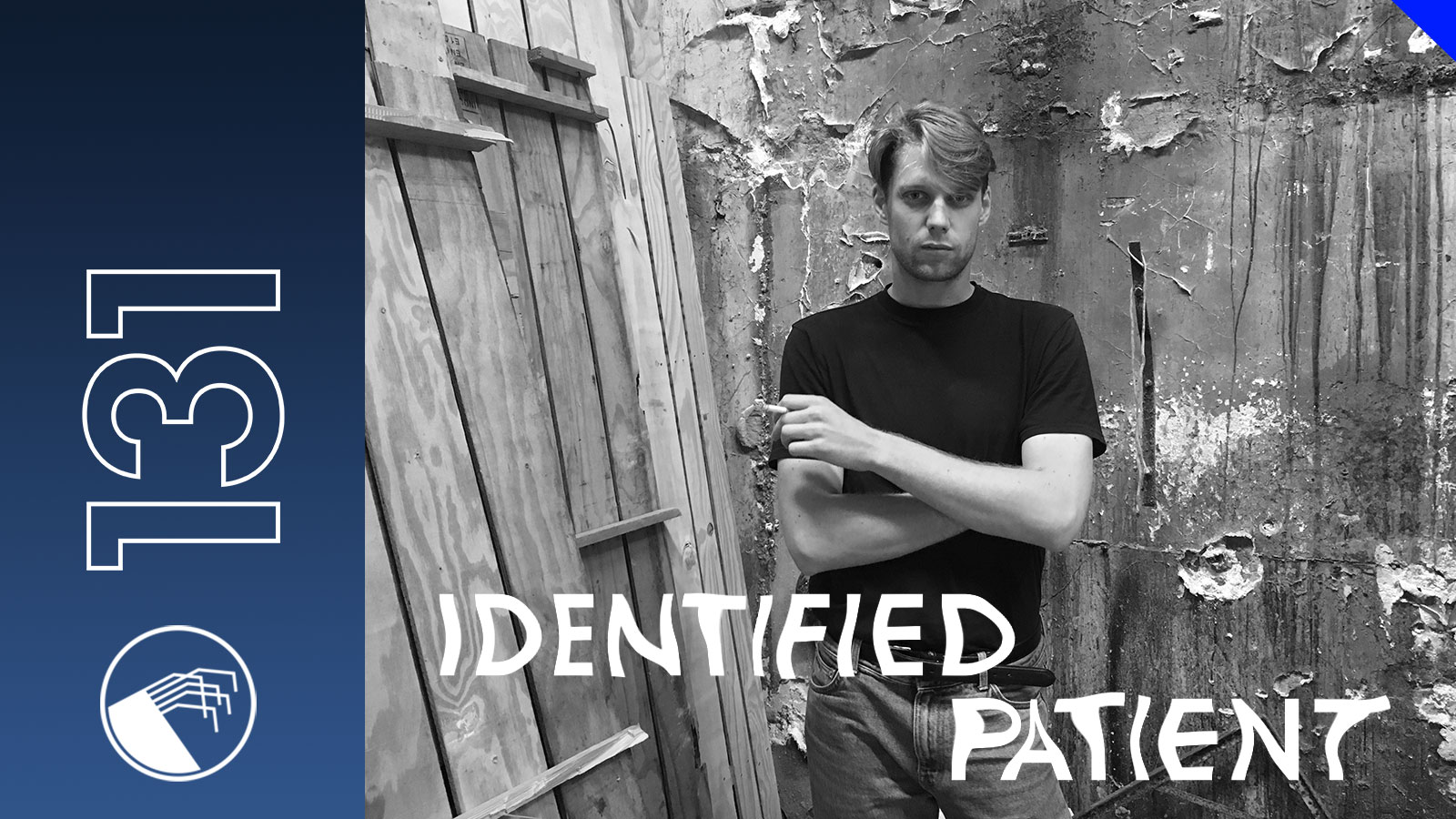 Job Veerman is a strong representative of the keen and talented youth in a modern Netherlands' underground scene. Under the name Identified Patient he released few rough acid EPs on Pinkman and Common Thread. And judging by the reviews, it's just the beginning.

Job started collecting records and playing music from his early teens. Even though the very first gig turned out as a total disaster, which, let's admit it, is a common thing for almost everyone, especially when you are 15 years old youngster, trying to do something for the first time, it sparked a big fire to do more. Now Job is 24, he's studying Cultural Heritage in Amsterdam and working at sort of bar/bistro thing around the corner of his house, just in order to make some money for gear.

Having a job does good or bad impact on you as a musician?
It is time consuming, which means less time for what you really like. Although finishing my studies is less suffering than working in a bar, and gaining some sort useful information is always a plus. It would be good to leave it at some time. It will give me ability to build a more structural process in the studio and to work on more projects. Don't know if that will work though.

What DJing means to you at this point of your life?
It means a lot. For me it is the way to represent all the music I like and I've been collecting for all this years; to let people feel what I feel. And same for production. Playing is an emotional transmission to the audience or to your machines.
And obviously there is feedback, especially from the machines. Sometime they give me unexpected respond to my emotions, so the whole flow turns into something different from what it was at the beginning.

What's the main function of a DJing for you? To amuse people, to educate them?
Not to educate, I'm not the fucking "Tune-Police" who is shaking his head when something played is not proper or slick enough. Of course it is cool to give a new and interesting look on some classic or really good work of someone, but let's not try to be so difficult about things. There is enough other shit going around on which you can shake your head down.
For me it is a way of setting ambiances you have in your head and present it to a group of people. The key behind it is this: you think that these ambiances (the tunes I have with me) are special and you want to show the crowd why.
After that the ambiance develops: through your own input and the reactions you will get. It is not a static thing. This actually goes around the same for working with your machines in the studio; you give something and take something back. Sounds perhaps a little weird, but look it like this: if you have a fucked up day full of coffee (or whatever) and come home and crank that drum machine, you will get some very aggressive stuff, obviously.

Do you prefer to communicate with the crowd or you don't give a shit about how people respond on what you're playing?
Haha, not giving shit since 1992. No, for real: I like to communicate with my crowd. We are in it together, so let's make something good out of it. People pay money to see you, and if you just don't give a fuck, it can make them questioning, why did they book you, or that is your whole thing. And it can only be better when you feel your crowd. Anyway As stated above, you try to give and receive, but you're definitely taking the lead, that must be stated!

At that point would you change the direction of your set, if you'd feel that people are not as receptive as you expected them to be? Or even if you see them leaving?
There are lines of course. If I'm playing some tunes I'm mad into and people leave, well in that case I will continue in some sort of way. Then it is just not working out, we better break up. Just like in a relationship, ciao!

What was the longest set you've ever played?
12 hours with a few friends of mine in Switzerland, that was a fucking mess. Loved every minute of it. Actually It wasn't hard for me, at least not during the set. But when we finished, I felt like totally crushed. The trick is that while playing playing, you are in a kind of special state of mind: you don't care about anything but music, just having a drink, smoking a cigarette and only enjoying the moment.

Tell us a little about your music collection. It consists of what?
I started collecting records around seven years ago. And now it mostly consists of releases that have a special place in my heart. Not only vinyl, I don't mind if it's digital only. I have a lot of fetish electronics, slow hypnotizing beats, acid, wave, techno. I prefer variation, because surprising people is a treasure. Also non-electronics have a special place, a lot of jazz/weirdo stuff.

Do you remember the very first record you got?
Yeah, I do. I was in Finland with my family on vacation, and my dad bought me a Walkman with the Prodigy tape in it. It blew my mind. And it was very helpful for my parents, because it made me shut my mouth up and do not fight with my sisters, when we were sitting in the back seat of our car. Fucking long drive from Holland to Helsinki.

A really good producer is necessary a person blessed with a talent or someone just working hard developing their skill?
First of all, nothing is necessary. But people who are "working hard to developing their skill" are skilled to follow some kind of a formula, just must combine that with talent, or some sort of creativity. I think it is important to have your own sound. If you got it, it doesn't really matter if something is lesser produced. But, damn, how much I enjoy, when I hear a combination of both, only few people have that.

What is the most important piece of gear in your studio?
One word: OCTATCRACK. For me the Octatrack is the best tool to work with, as I am not a computer man, really. But I still like to have some sort of new-age technical instruments. It is such a fucking beast for a good workflow, fucking up samples and, the most important, make your own samples. I'm actually buying the second one next week, going for the full 8 outputs, already geeking out here. I like to really know my machines. That's why I have a pretty small setup now, actually. Just a big mixing desk with a few pedals, a synth and Octatrack. I re-sample al my FX and turn it into something new. In the next EPs you will hear that a lot.

By the way, what's next on a schedule?
Well, the next EP was recorded with my girl Sophie Du Palais. She is on the mic and I'm in charge of banging beats. Very proud of Sophie, she's a talented speaker and natural performer and really enjoying studio time with this dangerous treasure. I can't name the labels yet, but let's say there is more coming from a city with a big harbour and something from the UK. Coming out this year, so keep an eye on these Patient records.