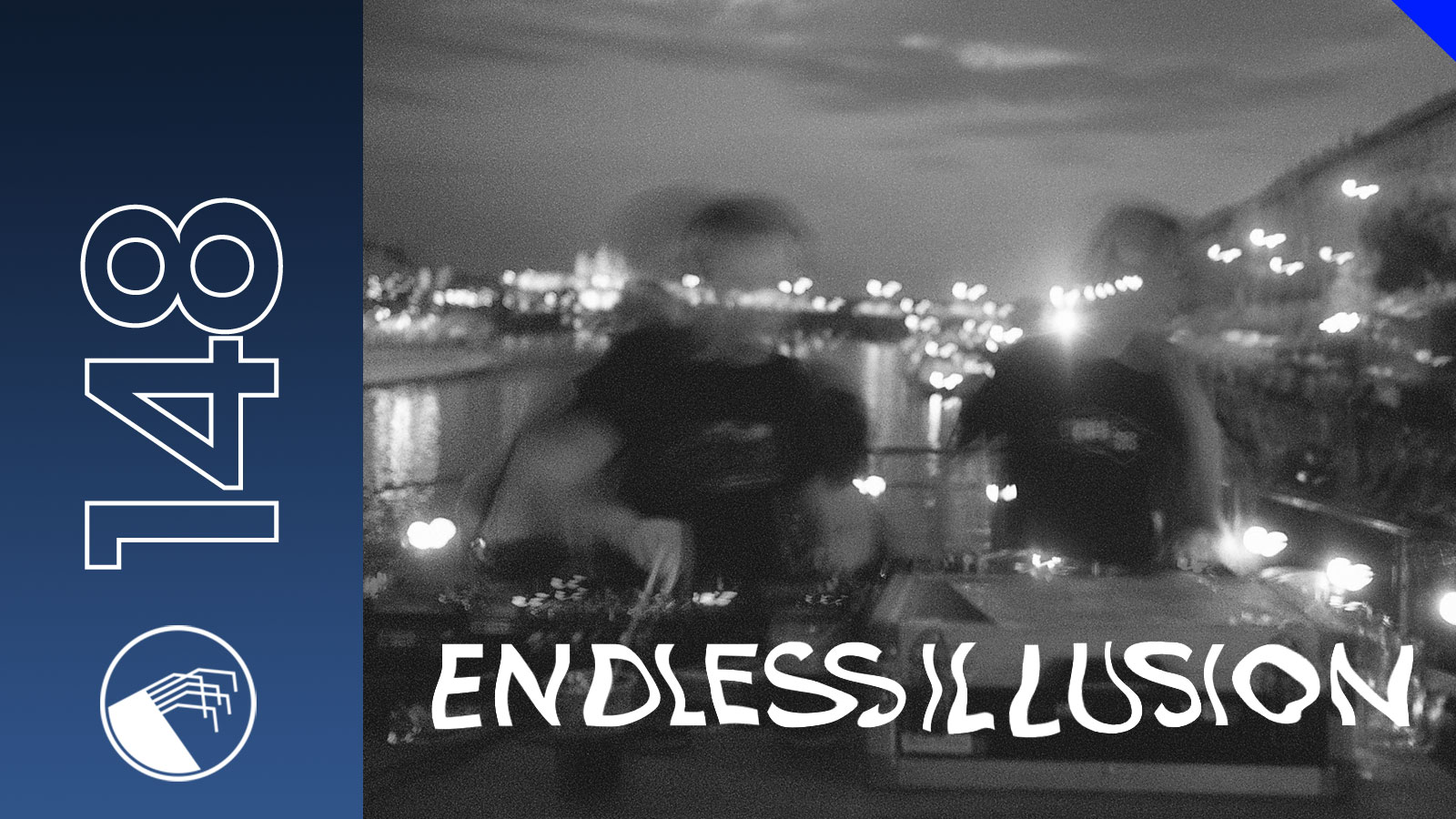 There is very little information about Raphael Kosmos and Layup, the real people behind Endless Illusion and even thought the music does speak for itself, we got the guys to answer some questions to accompany the podcast they have baked for our series.

DT: If you are looking for Layup online, it's usually related with Exhausted Modern, what's the story behind that?

DT: Who inspired you to create music and where does this inspiration come from?

L: I think people overrate inspiration, of course you absorb everything around you, more or less, but making music is kind of craft work, you have certain work flow and practice and know how to put ideas together. But if you want to hear that, then nature and being alive are an endless source.

RK: Personally I don't create music, I'm a DJ. Inspiration is non-stop, all around and mostly comes from hours of digging music.

DT: These days in music it's popular to use words from space dictionary, as planet names, creatures, NASA, missions, etc. Why most of your things so much related with the space?

L: It always has been this way, since first electronic recordings. In the late 60s and early 70s, there was strong futuristic vibe in the society. We started trips to space and people thought they are going to live is space in a few years. This was projected in all kinds of art, fashion and music. That is probably why people use it even nowadays, because space is the place and we made such a small progress since then in term of space travelling and exploring. People are still unsatisfied.

RK: I agree. Inspiration by the universe in music is natural for decades. For me it has been connected from the beginning. By the way, I still remember my flashbacks of nights, when I was very young and used to go to illegal rave parties. Those massive walls at the night, flashing lights, shadows of people. Like one big UFO meeting.

DT: Where were those parties? Why were they illegal?

L: Long story short, there was huge illegal techno party movement in the 90s and early 2000 in Czech, following already forbidden Spiral Tribe parties in England or Dutch Unit Moebius offshoot. Usually in military areas. Loads of LSD and early Cluster records stuff played +8 45RPM. Massive police intervention directed by politics has basically stopped it in 2005. The whole culture kind of ran out of ideas, people exchanged LSD for meth and all it became exhausted. But this experience was really important for my personal development.

DT: Do you believe that other forms of lives exist in universe?

L: For sure. It's impossible that we are alone, it's just too big and we know basically nothing.

DT: Together you are behind Endless Illusion name. When and how everything started? How do you know each other?

L: The whole project started back in 2011 as a blog about music and art. I had a strong need to share the overload of information that was inside me. I've spent long time digging in the music history and wanted to spread the word. "Intergalactic FM" radio made strong impact for me. I simply realised, that I can't build anything without knowing the context. With Honza we knew each other already from graffiti activities and it was purely natural to get together. There was a huge lack of this underground culture in Prague, that made us to start organizing our own parties, alongside our friend Sobert Rhythm, who developed more wave, minimal synth movement. Basically similar simple reason was behind starting record label. I just wanted to put my music out.

RK: We knew each other some time, as Ladislav says. I guess the biggest impulse to do something was the fact, that there was completely nothing around us, only drum and bass parties, hard techno music or tech-house. We used to listen "Intergalactic FM". We were so thirsty to hear it LOUD in the clubs. Sweet memories with funny stories.

DT: Could you share one of the funniest stories?

L: I like the one when we went to Croatia, to play Masters with local guys Zarkoff, LCN and Ikonal etc. With broken horn in the van, which was honking every time the steering wheel was turned, customs officer on the border looked really suspiciously. And it definitely wasn't good idea to come to the city in the night like that, especially when parking.

RK: Spontaneous party with TLR, Turbo Polyp & Arnaud in the weird basement of coffee bar with 2 active speakers and one guy doing visualization heavily on ketamine, voluntary entrance and full house & party till the morning. And one big strong memory is with I-F, definitely. We told him that italo practically doesn't exist here. We did kind of dark warmup mix, the Ferrence started with pretty dark acid techno and after 15mins straight to the 2 hours of pure italo super classics. All people on the crowd - hands in the air. Unbelievable.

DT: You can find that Endless Illusion is represented as a recording studio, multi genre platform and etc. How can you describe what is all about?

L: That is related to my previous answer, we started kind of too ambitiously and wanted to do everything, blog, parties, record label, exhibitions, but as you grow you have to choose priorities, so we stick with record label, own music and doing parties. Also graphic design is still very important for us. Mainly because we came from this environment and we still surrounded by talented typographers and graphic designers. So we love to let them to do quality job for us.

DT: Endless Illusion radio, how long is it translating space waves to earth?

L: I am not sure to be honest. I think since 2014? It was a big honor from "Intergalactic FM" and we always will be thankful for this opportunity. We love to be part of the family, especially because of the influence. It's a pleasure to bring it back to the game.

RK: My first radio shows were dated in 2012. I used to have "show" on a small local internet radio website. The concept was to invite some locals and have a chit chat about music. But the problem was when you are "alone". There was absolutely no underground freak scene that time. Then Ladislav has joined. And once I was drunk with Marsman in Prague and he told me "You should ask Ferrence for space". 2 weeks after we did demo show and Ferrence quickly replied that we are on the board.

DT: Did underground freak scene change a lot since that time? Is it easier to find those freaks to have chit chat?

L: Depends where, in Czech, not really big freak base has been developed yet. Abroad it probably did. Being a freak or at least pretend it became attractive for the market. Now you can see quite big festivals with focus mostly on weird music, especially in Netherlands. But we are still beginners compared to some colleagues from IFM radio, better to ask them.

RK: In Czech or Prague, I would say yes. More and more people are curious. But funny thing is, some local dancers are bigger diggers. Still a lot of local "famous" DJs, who think they are kings, but it's just joke.

DT: There are loads of Endless Illusion podcasts, which is your favorite?

L: My fav is probably Scientific Dreamz of U, I just love this guy. Personally and sonically.

RK: Not sure, loads of podcasts and radio takeovers are so cool. Sneaker DJ did a sick mix, TLR, Privacy, etc.

L: Depends what kind of electronic music, we have loads of mediocre no-opinion club music, we have biggest drum and bass festival etc. Underground dance music is about a few groups that know each other quite well within Prague, outside the city is almost nothing. There is maybe about 5 record labels pressing vinyl and no single quality record shop. We don't even export much electronic music, there are basically a few artists who release music abroad, which is frustrating sometimes, you just have to go and make it yourself, bring more effort, but that makes us stronger.

DT: Is it easy to find underground dance music party every weekend?

L: It is, especially now, when Ankali club was opened, line ups can easily match with top foreign clubs.

DT: Describe this mix that you made for us. Which space element inspired?

L: We did a jam as we do usually for "Intergalactic FM", old stuff, new stuff, everything together based on momentary vibe and mutual understanding.