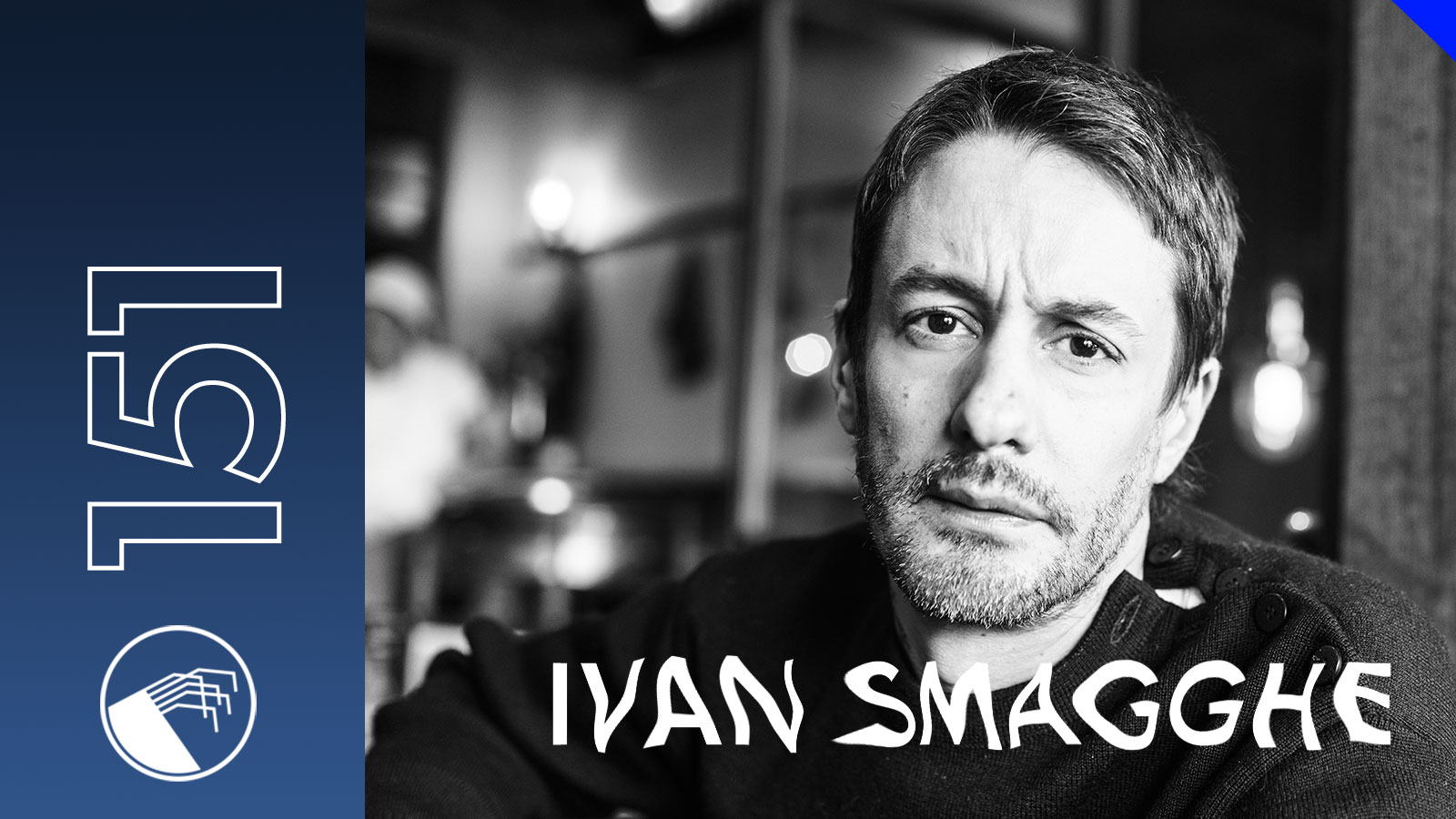 Be it the legacy of Black Strobe or It's A Fine Line, the back catalogues of Kill The DJ Records or the discoveries of Les Disques De La Mort, there's always more than one reason to keep Ivan Smagghe on your watch list. Any kind of news from London-based French expat who once balanced his political studies with working in a record shop (and no, you can't exactly say the latter took over) is exciting because, most of the time, Ivan Smagghe does not promise anything. For example, last year the artist who once released one of the most memorable Fabric compilations ever, came around with an anti-dancefloor album with a classically trained musician. There'll be more of Smagghe + Cross in the nearest future, and in the meantime, we discuss politics, friendships, trends and internet presence while listening to Ivan's DT podcast.

DT: I once read your thought on Its A Fine Line's imagery - I'm sure it was a joke, but the joke has to start somewhere: "What is pretty sure is that our imagery is not futuristic. But with the retro invasion, we may get into heavy CGIs (not)". Always looking for means to go against the current stream - could this be used to describe you as a musician, DJ, personality?

IS: Well... I suppose I may have a contrarian streak if that's what you mean. In many ways, it was a lot more simple to exploit that same streak when the dance music world was less "confused". I mean what is the "stream" these days? I'd say that there are streamS (plural), but they all now tend to function with the same mechanism: social media compulsory presence, bland pop or digger snobbery, or refusal of all the former which can be another way of exposing yourself etc.

I have never believed in the notion of "underground" and I even do less so these days, especially when commercial tactics and antics infuse this so-called microcosm. I am just observing a faster and faster hype cycle I have trouble relating with. That may be old man's talk, but I have to accept I am also that in a way. As far as DJing is concerned, I just play what I like, never believed genres per se but yes, maybe sometimes with a bit of provocation.

DT: Does this approach sometimes make you ditch your ideas you think are good, even great, just because they're not against the current trends?

IS: Hmmm, I would not go that far. And I am certainly not pretending the musical zeitgeist does not influence me. Hype is just timing ("against the current trend" = "tomorrow's current trend"). In the studio, I try not to care, and I rarely tackle club music anyway.

DT: Just recently Smagghe & Cross uploaded two stripped-down tracks from your album on Offen Music, Vladimir Ivkovic' label. In fact, one of them starts this very podcast. Was this done to reveal the core of your music to the average listener, or is there another idea behind it?

IS: No, these were more a one-off pet project of Mr Cross who is a classically trained composer and musician. Alternate versions, the core of the music is found in the record, provided it even exists. We have tropes, all projects have, but they mutate. Or next album for Offen is a continuation of MA, but also very different.

DT: How did you and Rupert Cross meet anyway?

IS: I met Rupert through Tim Paris, my It's A Fine Line partner. He was his piano teacher, then did arrangements for him, then for us, and so it started. We are, I think, hyper complementary as we are coming from entirely different worlds but it works, I think we learn a lot from each other and common ground creates itself easily.

DT: How did you come together with Nathan Gregory Wilkins? Was it a particular track or album that you both found worthy and then thought - mmm, maybe let's continue this musical friendship? How do you work on the radio show - is it an online process or you actually meet up in a studio?

IS: I've known Nathan for the best part of two decades. Weirdly, we spoke on the phone for years before meeting each other. Sounds romantic, right? Basically, I was working at Rough Trade in Paris in the 90's, and he used to sell me records. When I started playing a lot more in London in the early 00's, Nathan and his friends became "my crew". Great memories if a bit chaotic. As all crews do, this one dissolved but Nathan and I stayed close, through music but also other things (see below). As far as Channeling is concerned, there is no preparation whatsoever, I think it would ruin the fun, both of us liking the unexpected.

DT: Partnerships seem to be a running pattern in your musical life. Do you feel more secure and more creative when working in a duet? Is it more often you or someone else that offers to work together?

IS: I most certainly do like working with people. Some will say I don't dare to face my own musical insecurities, and they probably would be right but who gives a fuck really? Things happen kind of naturally, you start by trying a few things together. It sometimes works, it sometimes does not.

Working with someone is creating a constant feedback loop, and procrastinating is limited. The only thing I've learned the hard way is that you need to keep ego at bay; otherwise, it ends in tears.

DT: Being a member and fan of "Musings" Facebook group that you created (it's a pool of long reads that would not pop up on your timeline otherwise; the topics include music, history, politics etc.), I must ask, were you always such an in-depth reader and digger of facts, theories and slow news? Is questioning for you a way of life or rather a free-time hobby? Would you consider becoming an editor of an online/offline magazine, for example?

IS: I guess I've always been like that; questioning is critical. Questioning what you do, questioning your own camp, questioning trends etc.... I also was a student for years before diving into raves; I was going to be a researcher and teacher in political philosophy. Being 47, I sometimes wonder if I should have taken that "wrong turn" but I don't believe in regrets. I also lived a good half of my life pre-internet so reading and what you call "slow news" are still a core for me.?
DT: What about starting another part of life off-internet? Have you considered this? At least deleting Facebook?

IS: I think about it every day, to be honest. But it's not a line of work where you can allow yourself to be totally invisible is it, at least not me.

DT: You have also said once, "DJing and music have never been my whole life. There are a lot of interesting books, interesting movies, things to see and do". What about making a movie? Maybe you have already made one but under another name?

IS: Ahahah, no I haven't made a movie. I'm 100% not saying I won't though. Things happen when they happen.

DT: Getting back to your quote, about music being someone's whole life. This could be very life-consuming, do you agree? Do you intentionally balance things out with books and other things to see and do, just to keep the love for music burning?

IS: I like people who constantly dig, though I am not one. I do buy music but "when I do" if that makes sense. I don't hunt like a fanatic anymore; I used to. I'm happy with what I find. In a way, it's a more free approach to possessing music. Also, my entire collection burned in a fire in 1999, my attitude towards records was never the same after that.

I don't balance music with books and movies, books and movies are my life as much as music is, sometimes more, or in a different way because they are not linked to "work".

DT: What exactly inspires you to keep the DJ inside you alive? It's a hard job after all. Is it the musicians and events around you? Is it something else?

IS: This is complicated and personal. I've been doing it for nearly 25 years, and there have been many moments of doubt, self-deprecation, total hatred for "the scene", the fickleness, the cliques, the conformism... I won't hide it, it was not always easy, and it will never be always easy. But: it beats a normal job, and it's one of the things I'm good at.

DT: Do you consider yourself part of a 'scene'? Most probably not geographically bordered? In fact, do locations still matter for music? I mean, British people make parties in the Balkans, and Serbian people make events in Germany...

IS: I don't really like scenes, especially these days. Often too clique like. I mean I was part of one in the 00's of course, but in my naive young eyes way, it was "fun & party" based. I suppose I have musical affinities with some other artists and also a few long-time friends. It comes down to this: I'd rather hang around with someone nice & sincere who plays what he loves even if I don't like it myself than participate in a circle jerk around obscure records. Don't get me wrong; I also have friends who looooove obscure records, being a snob myself, I just have an issue with snobbery.

DT: Do you think there are more snobs than real music lovers in general? Why do people pretend to like something, where do they get off?

IS: There are snobs. There are music lovers. What I am trying to say is that it all boils down to sincerity, or something approaching sincerity. You can be sincerely playing mainstream music; you can fool yourself digging for (insert country/region/year) tapes. Or the other way around.

I'm not sure people "pretend" to like something, they do like it. Why they like it is entirely other question. Owning rare tapes becomes part of their cultural capital (aka das cool) may be. That's fine really; I'm just making conversation...

DT: What is the best way for you to search for music? Where to start if you don't want to follow paths? Obviously, if the track is on YouTube, it means people already know about it. Do you have 'secret' places? Do you search for music while travelling?

IS: But what is wrong with people already knowing about it? I actually like YouTube; it's an enormous rabbit hole for music. What are you after, the music or the object? That is also important. No, I don't have secret places, to be honest. There are places I love, or more suited to my taste. I order online like a lot of people, I get sent stuff. Buying when travelling is nice probably because it takes away the functionality (though I tend to buy less and less "functional music" but digitally - by that I mean tracks I will play for two weeks). I like finding things randomly; I'm not a religious buyer.?
DT: How many tracks you had before starting to make the DT podcast, and how many you had to throw away?

IS: I said it somewhere else, I don't really like dance music podcasts (the selfie of DJing), nor live recordings put online. I understand their marketing function and why people like them, but I kind of consider them as misrepresentations. That's just me though...

So "technically" I don't prepare anything. I have tracks, and I kind of play them for what I think works "in the moment" (a solitary one). I don't overthink. Sometimes it works, sometimes it does not. For instance, I don't know what was I thinking by putting that Autechre remix in there, but you know what, someone out there may like it so...