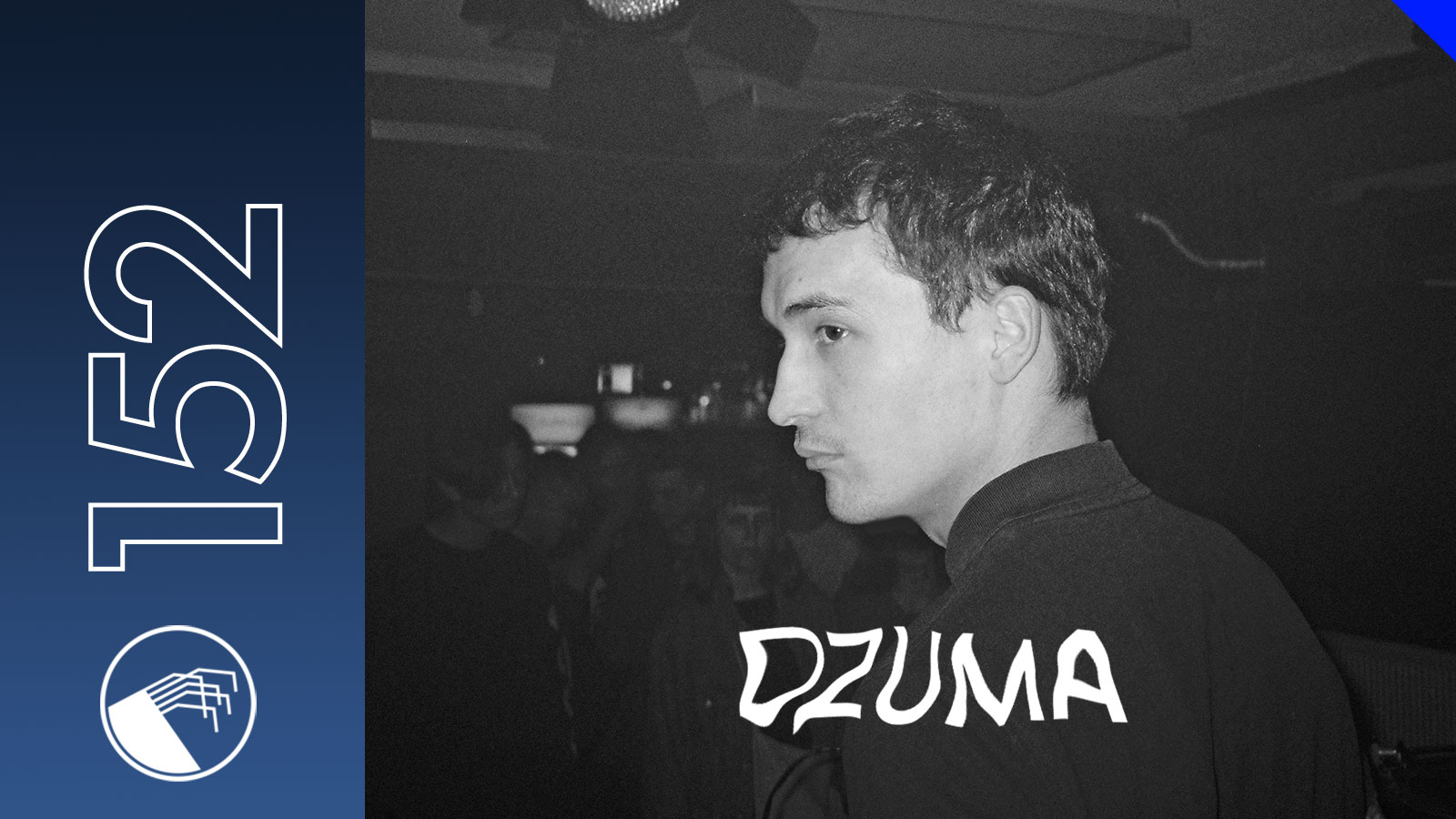 The latest DT podcast comes from Dzuma, a young DJ and promoter active in Poland right now. We first heard Dzuma when he invited Ernestas to play at one of his Syntetyk parties in Warsaw. We were so impressed with his passion and energy and desire to evolve the music scene in Warsaw we decided to keep in touch. We invited Dzuma to play a Digital Tsunami party back in April this year and we've booked him for DT Camp in August. Given all this, we thought it was high time to introduce him to our listeners and readers with this interview and podcast:

DT: Hi Dzuma, there is very little information about you on the internet, please tell us a little bit about yourself and how you got into music.

D: Well, I'm from Warsaw and I was born and raised here. I got into music quite early with stuff like Electric Wizard, stoner rock and black metal. Then I had a period when I was mostly listening to hip-hop, mainly sounds from the Polish hip-hop scene, groups like Kaliber 44 and Paktofonika. Its stuff that everybody in Poland knows, although I don't think its so internationally known.

When I was sixteen I started listening to electronic music, kind of electro and electro-punk. I was searching for music a lot on the internet, through Youtube and online magazines. I started going to independent parties too, I went to a party called Brutaż and this was important for me. I must have gone to my first Brutaż party in 2012 or something. Back then there wasn't too many people going to their parties, sometimes there was like ten people, but they kept going and now they're pretty much the biggest night in Warsaw. It was Wiktor Milczarek who invited me actually, he's one of the guys running Brutaż, I don't remember how we met but he invited me down there. They're also a record label these days, their latest release is by Wiktor, so you should check it out, he's very good.

DT: You work in a record shop in Warsaw called Side One. Please tell us something about this store and how you came to work there.

D: Well Side One is a record store known all around Poland, its been going for about thirteen years and there's no other shop quite like it in our country. It's small but it supplies records to every vinyl DJ in the country. If you play records in Poland you have to know Side One, its really a legendary spot. It isn't focussing on one genre, it has stuff from house to disco to techno to dubstep to jazz, every genre you have, hip-hop everything, and its only underground stuff. Its ran by Wojtek Żdanuk, or WojtekJ WWW and he's really a one of a kind guy and a good friend of mine. Its really hard to have a record shop in Warsaw, you don't earn much money and there's a lot of work you have to do and he has it all on his shoulders. Wojtek and Side One really helps to make the Polish scene what it is, we have only one underground record shop, he's really important and he helps a lot of people with what he does.

Ever since I started buying records I started going there, I befriended Wojtek and there was a moment I was looking for a job and he was looking for a person to work in the shop. I started helping him out with packages and mail order things, so that's how I began working there. Its a very interesting job because if you're working at the only underground record shop in Poland and whatever you buy in, in whatever genre because you think its good, then people will buy that. So its really interesting, I mean I get to look at other distribution networks, Clone, Rush Hour and really just select stuff for myself which I think is good, and then the best Polish DJs will buy it. Through this you have quite a big influence on what's happening all around Poland in the underground scene.

DT: You're a vinyl DJ yourself, what is it you like about vinyl and why do you choose to use it when there are such a variety of mediums to DJ music these days?

D: Well first I started playing sets on my computer then I was using CDJs until I started collecting records. The record labels that I found amazing back in those days they were releasing only vinyl and they basically made the choice for me. Then I bought some turntables and started learning how to mix. It was a process really, I didn't set out to become a vinyl DJ, it was just that the best music was on vinyl. Then I started to see how playing records was much much more interesting than playing files or whatever. It's harder obviously, but it is more interesting and its much more fun and you have to have fun when you're playing otherwise you won't play well.

When I think about it now, when I think back at my DJ sets I have a tendency to slow things down heavily, really slow things down and when you do that with a file then the algorithms on the CDJs sometimes don't work well. You're slowing down, speeding up stuff from files and it doesn't sound as good as when you're playing from a vinyl record. So I think now for me, that's one of the most important reasons why I play records, to be able to slow everything down really heavily and keep all the weight of the sound.

DT: Can you tell us a bit about the electronic music scene in Warsaw? What forms of electronic music are popular right now in the city and are there any local artists you really appreciate?

Well, I think a lot of people appreciate electronic music in Warsaw but most people are not that deep into what is happening in the underground. There's a few clubs, big clubs that work well but they book the big names on the weekend and that's not really what I appreciate. There's a big techno scene in Warsaw, dark, fast techno which I find perhaps a little bit dull, you know big kicks and high hats with one synth going on, that Berlin Ostgut vibe, Ben Klock etc

I prefer the local artists, for me one of the most important DJs working in Warsaw is RRRKRTA, who also runs Brutaż, I think he deserves more recognition. Besides his label he goes around Poland to Krakow or to other cities to set up parties and run his night there, and he's always working to present new DJs and producers, so he's very focussed on the local scene and I really appreciate that.

Another good artist is FOQL, she plays tape sets sometimes but is mostly a producer and live performer. FOQL also runs Oramics, a project based on empowering women in the electronic music scene, Oramaics will be running workshops this summer teaching music production, which is really cool. FOQL and her boyfriend, Copy Corpo a VJ, graphic designer and the owner of tape focused label Pointless Geometry are working hard to revive the tape format and release some great stuff.

DT: You run a night called SYNTETYK. Can you please tell us a little about this and why you started it?

D: It began two and half years ago and its been really successful I guess, I think now most of the people interested in underground electronic music in Warsaw and Poland probably know about us. We're starting to get invited to other cities, and we're organising a party in Kracow's best club, Szpitalna 1 this Friday, so its going well.

There's a couple of people working with me in SYNTETYK, one of them is my friend Karol Jaworski, we've know each other for about twenty years. His artist name is WLD or Axis Visuals and he's making all the visuals and graphics for our parties. There's also Milan Ciszewski, AKA DJ Huragan our resident DJ. He also makes our promo videos using old VHS tapes and stuff, which have sort of become a bit of a trademark for us, which is cool.

In the beginning we just thought there was not that much going on around Warsaw that we really liked, we thought there was space for more and we wanted to make our own impact on what was happening. In Warsaw if you have the guts and the energy you can just make your own thing and it will work, and that's the same with Syntetyk. We just started making our own thing and people appreciated it a lot.

The most important thing for us is to help make the local scene something more. We're not inviting big names, its pretty much always locals playing and its focussed on booking people who play analogue synths or from records. This is the most important for us, to make the local scene better and to give people the opportunity to play who might not otherwise get that opportunity very often.

DT: Outside of electronic music specifically, what's it like in Warsaw right now, is it a good place to be?

D: I guess Warsaw is a pretty sad city, I mean in a historic way its been destroyed during war several times and there is a pretty sad atmosphere going on and that makes the music quite nostalgic. I mean not everybody feels that way, maybe its just my way of feeling [laughs], but it can be a bit of a melancholy place I think.

The best thing about Warsaw when it comes to making music and art is that there are a lot of people interested in independent projects, but then there's not that much stuff going on as in say Berlin, Amsterdam or London. As I mentioned before, basically, if you have the guts and if you have the time to work on what you want, you can quite easily go from nothing to being the biggest party, label or artist around. Because its so local and not so developed whatever you do, with effort you can make it quite successful, people will check it out. I mean what I'm basically saying is that there is more space to get things done. There's space for new stuff and that the best thing about Warsaw.

DT: Do you produce music at all? Could you tell us something about this please?

Well, for a long time I've been working on music now, probably about five years and I know how to use my gear. You know when you want to make music on hardware and synths and get real quality from them you have to spend a lot of time, so I work a lot on my music and soon I guess I will try and release something. In the future with SYNTETYK the plan is to become a label and release some music, we'd like to release music from me and my friends and the local artists we admire. So we're looking forward to getting that running in the near future.

DT: You're going to be playing the DT Camp in August, are there any artists you're particularly looking forward to seeing?

D: You know when I look at all the great artists playing this year I think I couldn't name one. I'm just happy to be able to meet all those people because the line-up this year is really filled with artists I want to listen to and meet so, I'm just really happy I'm going really.