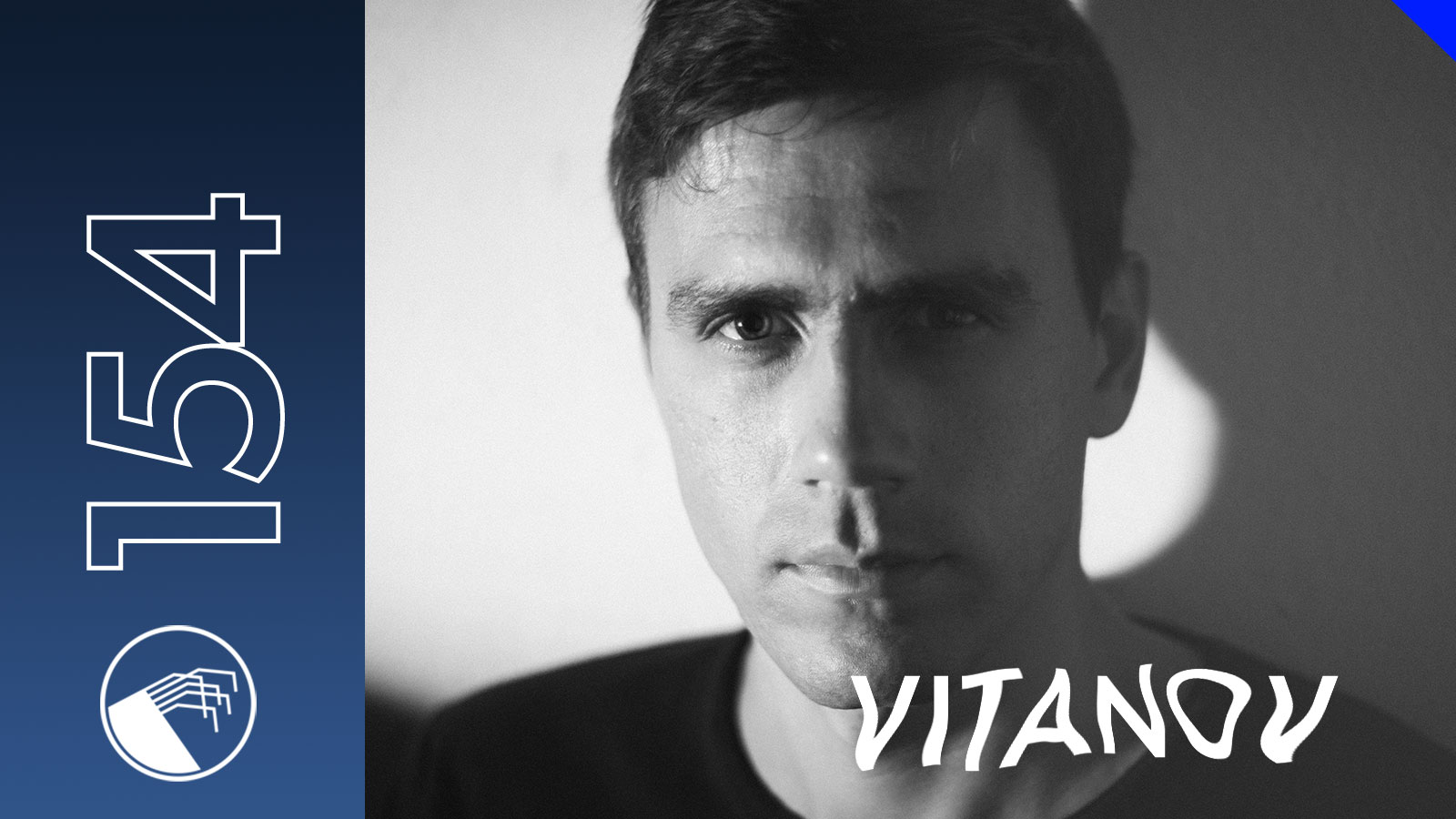 This weeks podcast is from Vitanov, recorded live in Belgrade's club 20/44. Like many Eastern European and Balkan cities Belgrade has experienced more than its fair share of tragedy. Yet similar to many of these locations Belgrade today exhibits a vibrant, exciting, creative arts and music scene driven by proud, educated people determined to do new things their way. Drugstore is perhaps the city's most famous example of this, both a musical community and living, breathing art installation. We shared time with Vitanov, Drugstore resident, party starter and record label boss to hear a little about what he does and why, to try and understand something of the cultural and physical contexts that move him.

DT: Hi Vitanov, this is the first interview you have done, can you tell us a little bit about yourself please?

V: I was born in the mid 1980's, thirty three years ago, and grew up in suburbs of Belgrade. My first encounter with electronic music was in the 1990s with popular electronic bands like the Prodigy, the Chemical Brothers and Orbital. Belgrade has always been a cultural centre for the Balkans, and of course what happens here draws influence from what goes on in Western Europe. We had important venues in the 90's such as Omen, Akademija and Industrija where the first Belgrade techno, trance and house crews organized numerous events. Performances of big names such are Prodigy or Laurent Garnier happened as early as in 1995.

After that, I became attracted to Goa and psychedelic trance, the first parties I visited in 2000 were trance events organized by the Technokratia organization from Belgrade. Over time, my tastes developed towards techno, electro, minimal and deep house. All in all, I like powerful, melodic and intelligently crafted music which induces euphoria of some sort. I was so obsessed with music back then that I even produced my own stuff on various software and analogue gear, but never got to the point of releasing anything.

DT: You're part of the collective 'Beyond House', can you tell us about this?

V: Around 2010 I started buying vinyl, because I really liked how the music sounded in that medium. I wanted to mix tracks and enjoy my records in continuity, like in a club, so I bought my first DJ setup and moved all my equipment to a small studio space I'd rented. Back in 2011, my friends and I Doo, Ognjem and Damir Zekiri, would play long back to back DJ sessions together in the studio. These guys had already organized a few Beyond House nights at 20/44, a club held in a boat on the Sava, a river running through central Belgrade. It was a natural thing for me to begin to help them with their parties. At the time, disco was very popular at the boat, so idea was to make the club scene richer with a proper underground house parties.

Beyond House nights gravitate towards house music in the broadest sense you can imagine. A bit later, Nikola Vemic and Ali G joined us as well, so there were 6 of us in the crew and we rented a bigger place to play records and hang out together.

Up to now, the Beyond House collective have hosted over thirty international DJs including Intergalactic Gary, Zaltan, Hunee, Sacha Mambo, Mick Wills, Interstellar Funk, Kris Baha and Marsman from Pinkman. During the seven years of our existence all of us have matured as DJs and developed our own unique tastes. Today I'm not as involved with Beyond House as I used to be, though I still play BH parties a few times a year on nights which are conceptually close to me.

DT: You have a strong relationship with Drugstore Beograd, can you tell us how this came about?

Drugstore is a venue where you can play very raw and twisted music. As a DJ you can experiment with colder, darker sounds and take your sets to the very edge of what can be considered dance music. The audience at Drugstore is very open minded so you can experiment, but they will still understand and appreciate the music you're playing. Drugstore has a unique charm: cold, concrete, industrial and dystopian aesthetics, this makes it the perfect environment for what I like to call proper rave experiences.

I've been a resident DJ at Drugstore from almost the very beginning, back in 2013. Since then the venue has evolved into a techno institution and one of the two main underground clubs in Belgrade, with the other being 20/44. Nowadays I mostly play there during "Yes" nights which I organize monthly with my friend Stevie Whisper (Stefan Unkovic), a DJ, producer and graphic designer from Belgrade.

DT: You also run the club night 'Yes', how is this different to Beyond House?

V: "Yes" night is actually a continuation of a project Stevie Whisper began, it was originally known as "Techno Yes Techno" that began at 20/44. The name was a funny response to "Disco Not Disco" collective who still run parties at the same venue.

When I met Stefan, we were in a similar place musically and the music we played back then matched really well. I began helping Stefan to organise the "Techno Yes Techno" parties, these were happening every Wednesday night during summer 2016. Later, we moved newly renamed 'Yes' nights to weekends and started inviting interesting local and international artists to play.

The initial idea behind "Yes" was to build a platform where we could express ourselves musically without any compromise or any stylistic limitations. During our parties we like to play pretty much anything, we can go from very slow industrial, synth wave and guitar rock bands to obscure disco, and experimental techno, finishing it off with ecstatic trance at 140 bpm, if we so choose. Part of the atmosphere from a typical "Yes" night you can hear on the recording I provided for this podcast.

DT: Yes has very recently become a label with your first record YES001 featuring Andria and A//O seeing a release in June this year. Why did you decide to start releasing records and what do you hope to achieve through the label?

V: Belgrade as a scene has lots of potential and many talented but unknown producers. With 'Yes Belgrade' we wanted to present what our city has to offer, providing a platform that could draw worldwide attention to Belgrade's local artists and what goes on here. A//O had already performed several inspiring live sets at various "Yes" nights, whilst Andria had been visiting our parties and had sent us some of the amazing stuff he'd been producing. It was a logical decision to pick these artist's tracks for our first release, and we plan to keep moving forward with local based artists for our future releases. At the moment we're preparing the second and third Yes records which should be available by the end of the year.

DT: This podcast was recorded live at 20/44 in central Belgrade. Checking the club's event page 20/44 invite many interesting international artists and you have also held editions of your 'Yes' night at this venue. What is it you like about this club, can you tell us a bit about it please?

V: Until Drugstore opened, 20/44 was the only venue that played music that interested me. Schwabe and Brka initially defined the sound of 20/44 with their 'Disco Not Disco' nights, inviting incredible underground heroes from the scene abroad. 20/44 is the place where I have experienced some of my most memorable moments in a club, it has a perfectly sized dance floor, a very cosy atmosphere and of course amazing people who really know electronic music. These are all reasons why 20/44 is one of the most loved venues among DJs in Europe. Aside from this, a great influence on the club and it's character has been Vladimir Ivkovic who still plays there a few times a year and his sets have the status of a religious ritual among us.

DT: Since the mid-00s underground dance music has increasingly tended toward darker themes and colder sounds. Sound pallets and rhythms sourced from pre-rave: European industrial, dark ambient, post-punk and EBM influenced dystopias are winning out over the rave utopias of the 90s. Do you have an opinion on why we are witnessing this cultural shift in dance music?

V: Today's electronic scene has grown so much that it's very hard to speak of trends in club culture. It seems to me that every genre evolves simultaneously and that it has its own audience.

In regards to industrial, post-punk and EBM influences in modern underground techno, I think that cyclical appearances in tandem with the purification of older forms is happening all the time. In my opinion, when DJs and producers get bored with certain types of sound, rhythmic patterns or even tempo, their explorations become deeper. They try to find something which sounds unknown, interesting and fresh to them and their generation. I am noticing that the same thing is now happening with trance influences in today's techno, there are several DJs and producers exploring these sounds, but in a more refined and slower form. Nevertheless, I believe that the essence and emotional charge of the modern techno genre is still there and this emotion always remains unchanged.

DT: Your own DJ sets have a mystical, timeless psychedelic quality to them. Not quite techno, but neither ambient drawing on sounds from Europe and the near East past & present. Are there any particular musicians or examples of art which have influenced your approach to DJing and record selection?

V: My current selection is definitely a result of many years of enjoying electronic music, partying, and the particular vibrations I am resonating with at the moment. I've always had an intimate relationship with music, so what I like in music evolves with me. Whether it's techno, nu-disco or progressive trance for example, I need to hear perfection and intelligence in it, in order to like it. It also needs to sound fresh and be innovative, and that music is not easy to find at all. When I get to play in a club my selection is already very filtered through my own tastes and history, so it has a specific "sound" as such. The flow I create in my sets forms spontaneously thorough non-verbal communication with audience and space.

DT: Can you introduce us to three or four local DJs and/or producers active in Belgrade right now who you personally enjoy? What is it you like about the work of these artists?

Of course we have the two guys on our first release: A//O and Andria. Another local project you shouldn't miss is Opskura, an online streaming show broadcasting various DJ/live sessions regularly.

DT: What do you think makes Beograd special, unique or different when it comes to parties and underground electronic music?

V: As we are a bit distant from the clubbing centres on the map, but still part of European cultural heritage it was possible for us to develop unique mentality and unique blend of East and West which gets manifested in everything we do, as well as in our club culture. The pressure of The System is also quite low here, there is less structure in everything so people who visit Belgrade feel very comfortable and you can usually feel that vibe on our dance floors.