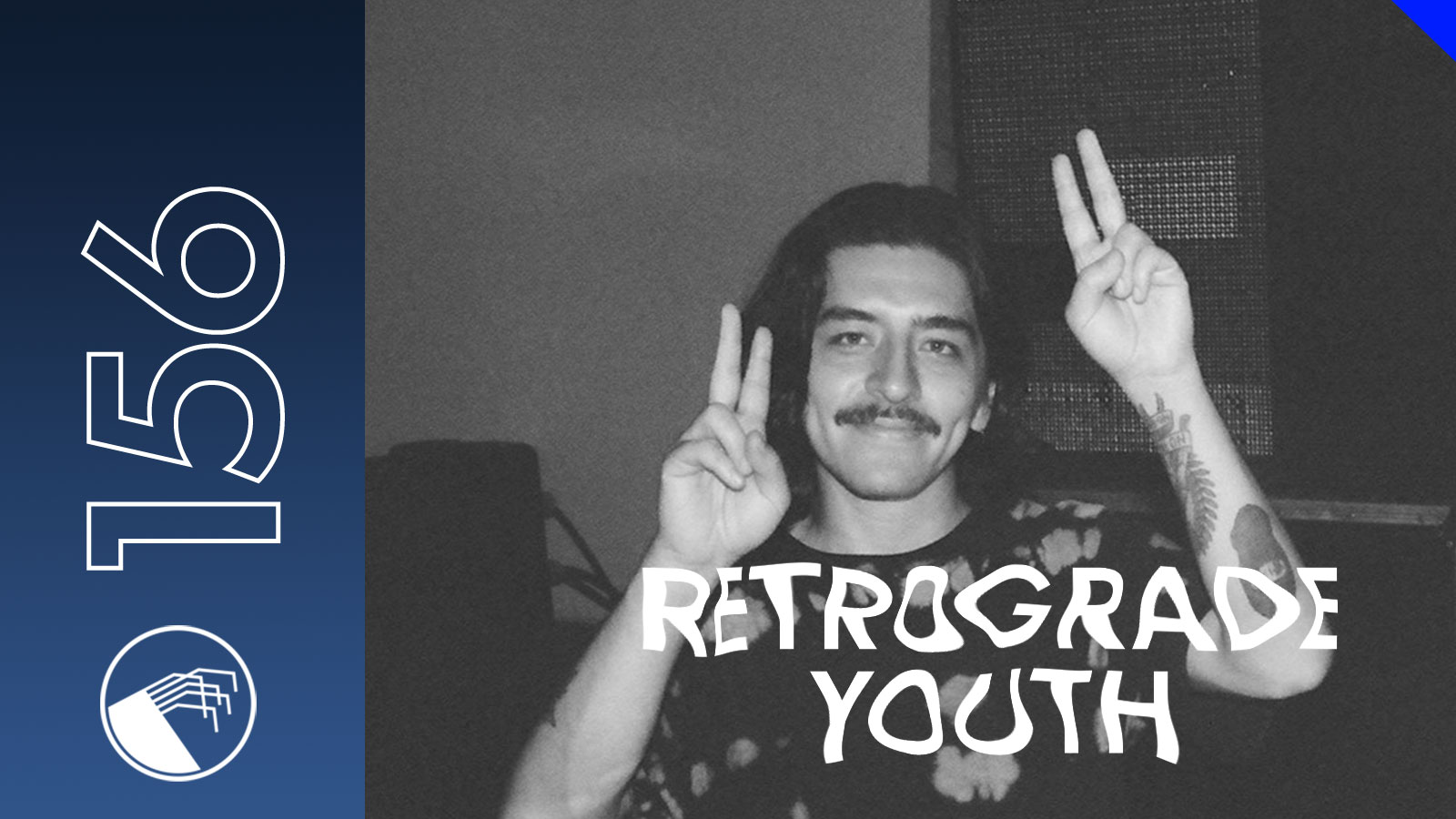 Our next DT podcast comes courtesy of Colombian national Retrograde Youth, also known as Felipe Marín. With releases on respected Dutch labels, shows on Operator Radio and Red Light Radio and an ongoing European tour, Felipe is an up and coming artist with a bright future. We managed to share some time with Felipe to ask him a little about his musical background, the events he helps to run in Medellín and his connections with the Dutch music scene.

DT: Hi Felipe, can you tell us a bit about yourself please? Where did you grow up and what were your first experiences with electronic music?

RY: Well, I was born in Bogotá Colombia but I’ve lived in many cities and towns around Colombia, I’ve lived in Medellín for the past fifteen years.

My first experiences with electronic music weren’t really that interesting, way back when, right in the beginning I started out listening to commercial shit like early Daft Punk, Tiësto and Paul Van Dyk. Underground music from Europe and the States was not very recognised in Colombia at the time, so it was hard to find unless you knew what you were looking for. Over time though, I started looking deeper and finding some very nice stuff. I remember one of the highlights was when I found L.I.E.S. this was a memorable introduction to the type of electronic music that really started to blow my mind.

Around 2010 I began to learn to DJ, practicing at home at first and after a couple of years years I got my first gig with a crew I used to work with called Sonido Fabricato. Some time after this, through a good friend of mine called Markovich I joined the Taking Over crew and things started taking off from there.

DT: Since 2013 you’ve been organising the Move parties out of Medellín, inviting artists like DJ Stingray, Silent Servant, Gunnar Haslam and Carlos Souffront. With who do you run Move and why did you begin to create these events?

RY: In the beginning Move was founded by four different people and the main purpose was create unity in the electronic music scene in Medellín. Move was basically a fusion of promoters active in the city at that time. This was back in early 2013 and I joined the crew in late 2013.

Over time more people have come to be involved with Move and now we are twelve people working together. We are actually launching our own vinyl label, also called Move and our first record will be out in November featuring Merino, Blotketch, Black Propaganda and myself. All these artists are involved with Move and help to organise our parties.

DT: Delta Funktionen released your first E.P. ‘Earth Disorders Part 1’ on his label Radio Matrix in 2016. In 2017 your E.P. ‘We're Not Humans Anymore’ was released on Rotterdam’s Pinkman and you have a track, ‘Final Day’s on the forthcoming compilation ‘Five Years of Tears Vol. 2’. You seem to have quote a connection with the Netherlands, how did this come about?

RY: It all started when we brought Delta Funktionen for the first time to Medellín for a Move party back in November 2014, (it was a sick by the way…). So well, we stayed in touch after this and I sent him one of my tracks, he liked it and the rest is history. Some time later Patrick (Marsman) contacted me and asked me if I wanted to send him music and this resulted in the E.P. ‘We’re Not Humans Anymore’. I feel a certain connection with the Netherlands in general and through the music and the labels I’ve made some really good friends from there.

DT: You’re also involved with a second collective in Colombia known as Culto. Why did you start this and what is the difference between Culto & Move?

RY: Culto was born a couple of years after Move and it began because we wanted to throw a different kind of party and invite some unknown names to the city. Our first party was with Greg Beato and Anthony Naples back in December 2014, that sound was very new to Medellin at the time. The main difference between Culto and Move is the sound, Move could be described as a bit more techno orientated whilst Culto is a platform that can host a wider variety of genres and artists.

DT: Your productions and DJ sets seem inspired by lo-fi productions from the 1980s, post-punk, EBM, minimal wave etc. What is it about these musical forms that you find exciting?

RY: Yeah well I like all this music but also I like many others too, I try not to be too close to a specific type of music to be honest. Maybe people tend to associate Retrograde Youth with a specific sound or style and in the beginning the idea of Retrograde Youth was about fusing old sounds with new ones and new ways to make music. However, over time my approach has become broader. I take inspiration from everything now, I live in a country that is very colourful music wise, so I take inspiration also from Latin and tribal rhythms. Now everything is an inspiration to me.

DT: Can you describe a little about the electronic music scene in Medellín? Has it existed for a long time and are there any DJs or producers we should be looking out for?

RY: Well, there have been house and techno parties happening in Medellin for a long time, but I’m not sure you would have described it as a scene. My first experiences with parties in Medellín involved minimal techno parties that took place on farms and spaces away from the city.

House and techno in Medellín really started to get bigger around 2010, the most successful promoter back then was Medellinstyle, bringing Chicago and Detroit heads to the city for the very first time, people like Derrick May, Alton Miller and so on. After a few years more people began to get involved with promoting and creating events and this is when Move started.

The internet has helped people a lot to discover new things and people have become more receptive to newer forms of electronic music in general. Things are definitely getting more colourful in Medellín when it comes to underground sounds and there are a greater variety of sonic options now.

A couple of local DJs I personally really enjoy include Lust Attraction, Julianna, (who recently did an RA podcast), Merino, JJH and Byron Maiden.

Some local producers who deserve greater attention include Zed Kappa, Verraco (who runs the Medellín based label Insurgentes), Black Propaganda, T.D.D and the well-respected Gladkazuka.

Also apart from the music I want to mention my friend Doppelgänger, a very talented VJ who has worked with us since the beginning, I really think his work is amazing. Maybe in the near future we will start an A/V project together, let’s see what happens.

DT: If a DT reader was to visit Medellín tomorrow, which bars, clubs, record shops and spaces more generally should they visit to get an informed experience of contemporary electronic music culture in the city?

RY: Sadly a few months ago one of the clubs that helped us in bringing new things to the city closed, this was the Mansion Club. Now if you want to party you should visit Calle 9+1, it’s kind of like a small warehouse. We also have Club 1984, and they have a fantastic terrace where you can see right over the city, it’s an amazing view. Also if you want a bit of a darker experience you should visit Libido Bar, I just can’t explain this place but you should come just to feel it.

Almost a year ago, unfortunately the most interesting record shop in Medellin closed, Doce. Today we have Surco Records however and in the downtown area you can find a few second hand shops with various types of of Latin and Colombian music.

DT: What can we expect from Retrograde Youth in the coming months?

RY: Well, I’m pretty excited about a tour I’m doing right now actually. I’ve already had two gigs, one in Amsterdam and the other one in Helsinki. Everything has gone amazing so far. This weekend I’ll be in Kaunas at Men? Fabrikas "Potiomkinas" with the DT crew and of course I’m very curious about how is it there too!