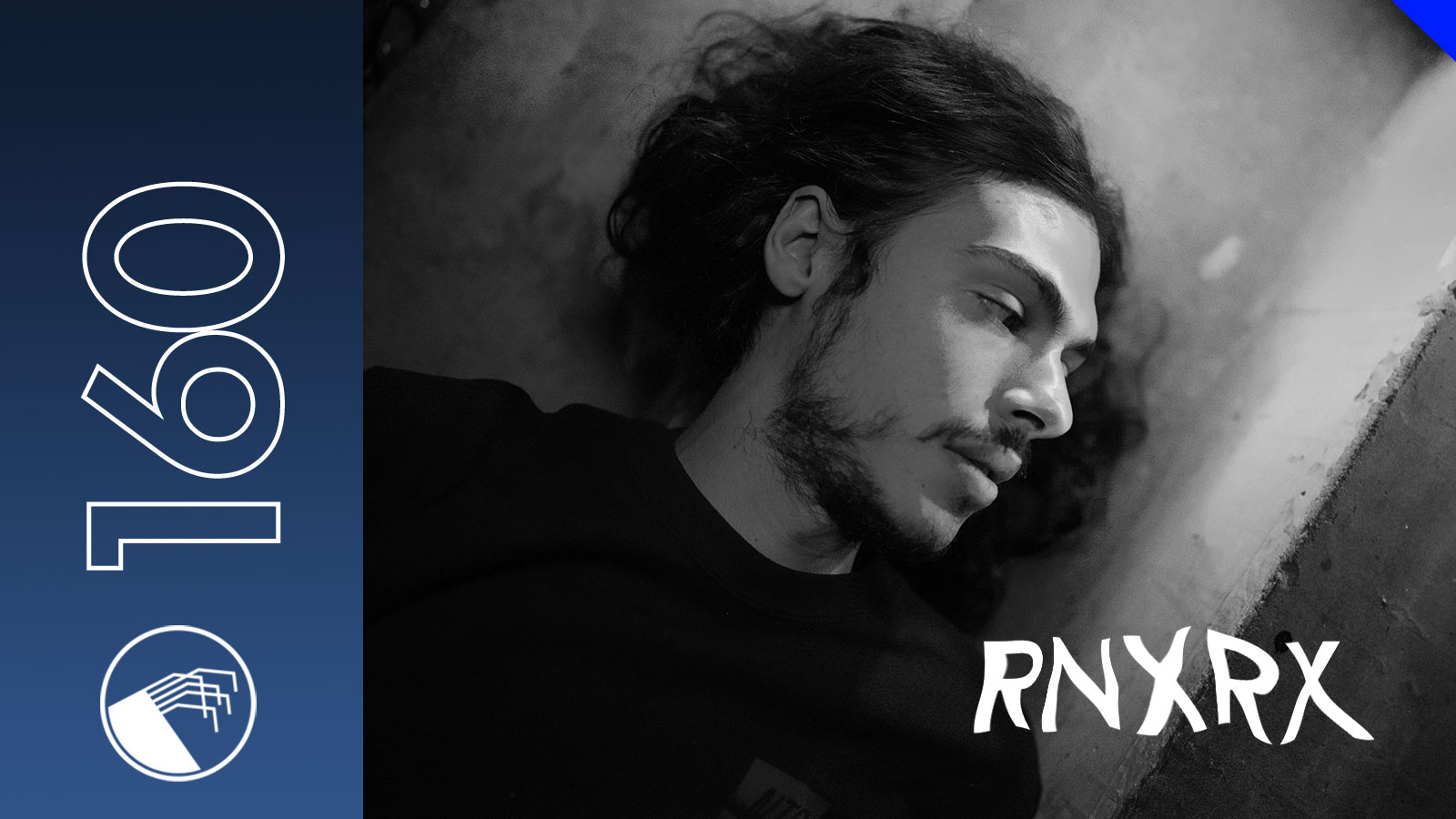 Our latest podcast comes from Argentinian born RNXRX, a producer and DJ currently orbiting around the city of Barcelona. RNXRX’ 2018 vinyl release generated quite a lot of attention on the interwebz, and saw some serious deck time in the darker recesses of the underworld. Not one to slouch, RNXRX is a resident of Barcelona’s long running back street techno shrine MOOG and helps to run the CERCLE organisation.

DT: Your Soundcloud page states something along the lines of: producer and DJ born in Argentina, raised in Italy and living in Spain. That’s quite some moves you have there. Can you tell us a little bit about yourself and your personal history?

RNXRX: I was born in Argentina where my family and I lived together until the economic crisis in 2001. Then we moved to Italy and spent several years in Treviso where I studied and spent part of my youth. I have been living in Barcelona for quite some time now.

DT: What’s your background with respect to music? Did you start out as a DJ or promoter for example, or did you get right into producing straight away?

RNXRX: I started as a producer and I have always been self-taught, just learning how get that particular drum hit or sound… On the internet you can find everything.

DT: Why did you decide to start to produce electronic music, what drove you to sit down and learn?

RNXRX: During my childhood the music that my father listened to whilst he worked at home was an influence. Music has always been playing at my house: jazz funk, psychedelia, Miles Davis, Prince, James Brown, Pink Floyd, Jethro Tull etc. From my mother’s side the sounds of the seventies and eighties were more popular, people like Nina Hagen, Madonna or Whitney Houston.
I was also really into sci-fi cinema from a young age. Later I became a freelance graphic designer and much of the work I did I did from home too. So there’s a combination of my two passions there: music and illustration, graphics combined with staying up for hours behind a screen to finish artwork. So I guess music production just comes out of that. I was also lucky to have good parents and to be taught the principles of creating art. I carried this learning over into adulthood.

DT: Your first music was released on Barcelona’s Drok Records in 2015. Can you tell us a bit about the people behind Drok and how your music came to be released on their label?

RNXRX: Well, it was my first release and it was an attempt to become more experimental with techno. I met the owners of Drok through a mutual friend and with them I made my first steps into the room so to speak. Over the years since I’ve moved in other directions, but through Drok I started to gain my first great experiences, playing an important club like Razzmatazz in Barcelona for example

DT: Your first vinyl EP, ‘Ninja Scroll’ was released on M.U.S.A earlier this year, receiving attention from DJs like Mick Wills, Jensen Interceptor and some guy called Ernestas Sadau. Can you tell us a little bit about the ideas behind the music featured on the record?

RNXRX: What to say about this E.P... I'm really proud of it! Could not be happier. For having been my first physical release and for all the response it received. When people started started writing about it, I was stunned. Jensen, Mick, Alienata, Ernestas. I thank you all! I love you! <3

I think that more than Ideas, this album came from Feelings. It was a very special moment of my life, years ago. It was not easy. I wrote them and they stayed there, in that place... I left the tracks for a year, and then sent the demos out.
I met Edu, Hector and Nachi from M.U.S.A. / Struments Records at Fira del Disc here in Barcelona. They had heard the demo and fell in love with a few tracks, they liked the electro ones, they were different to the techno tracks I had already sent them. Its become a friendship and the guys from M.U.S.A. : Morocco Underground Still Alive, made this release happen. I owe a lot to them. They are very good friends, great people and wonderful teachers.

DT: Your music has a bass heavy, distorted break beat vibe going on. Where do you think your appreciation for this sound came from?

RNXRX: My gen comes from listening to post-punk: Sonic Youth, My Bloody Valentine, and some metal and electronic shit of the 90’s: Godflesh, NIN, Quake soundtracks, Noise Cassette music and spending hours listening to all that... So I think it comes from having absorbed many doses of IDM, Sci-Fi movies and cyberpunk comic books.

DT: On the E.P. you have a Black Marlin remix one of your tunes. How did this occur, did you approach Black Merlin personally for example? How did it feel to have one of your own productions remixed by such a highly respected producer?

RNXRX: It was the idea of the guys behind M.U.S.A. We love talking and discovering new producers. The M.U.S.A. owners wrote to George (Black Merlin), and he replied. I’m very happy… I think sometimes it's important to have the support of respected producers when it comes to releasing a record. It's what I've always liked about electronic music. Sharing feelings, physical support. One helping the other.

DT: Moog has been important to the Barcelona scene for quite some time now and when reading about electronic music in Spain it won’t be long before you hear about the club. You’ve played there a few times, could you tell us a bit about the venue, maybe something about its history, who runs it and what its like to play there?

RNXRX: MOOG has become my second home after CERCLE. MOOG is like the little TECHNO house here in Barcelona. It has years of history and has hosted loads of local and international talent, artists like Oscar Mulero, Tiga, Headless Horseman, Magda, AFX, the Horrorist, Adam X, etc.
But for me, I can assure you that many of those who once were and still are its residents will take you to another dimension: David Lost, 6tma (Manel), Gus van Sound, Angel Molina, Rubén Seoane, Uroz, are among the best DJs in this city. I’m currently a resident playing once a month, so for me it is a great dream come true.

It's already my fifth month here, and putting on records in this place is always energetic. The room is never empty and people give it their everything until the last minute of beats play out and the lights already on in the room.

DT: How’s the scene in Barcelona right now, and who are the local DJs, producers and promoters we should be paying attention to and why?

RNXRX: If there is someone in the city, who knows a lot when it comes to creating an event, and leaving me open-mouthed with their line up every month, it's Guim Lebowski. As a DJ Guim has been a teacher for me, he’s also a great friend and colleague.

Together, myself, Guim, NICO, Bianca and the graphic and illustration collective INFRACOMM.lol make the CERCLE: A party already known, by many of the great talents of the international scene: DJ STINGRAY, HELENA HAUFF, THE MOVER, VASCIKA, TEXTASY, VIOLET POISON, CODEX EMPIRE, SCHWEFELGELB, SKEE MASK, SKATEBARD, etc. Many Djs and local producers owe a lot to CERCLE, it is a small playground but full of good energy.
Behind your intuition when it comes to capturing emerging talents, is the friendship and the flow of sharing different music and having fun.

About local producers I can tell you what will come out in the next M.U.S.A. there is a HEROIN FROM THE NORTH (Body Music) and new material from NEHUEN and BORIS DIVIDER very very very HEAVY. And about favourites in production, CARDOPUSHER, and some music of very close friends here in the city.