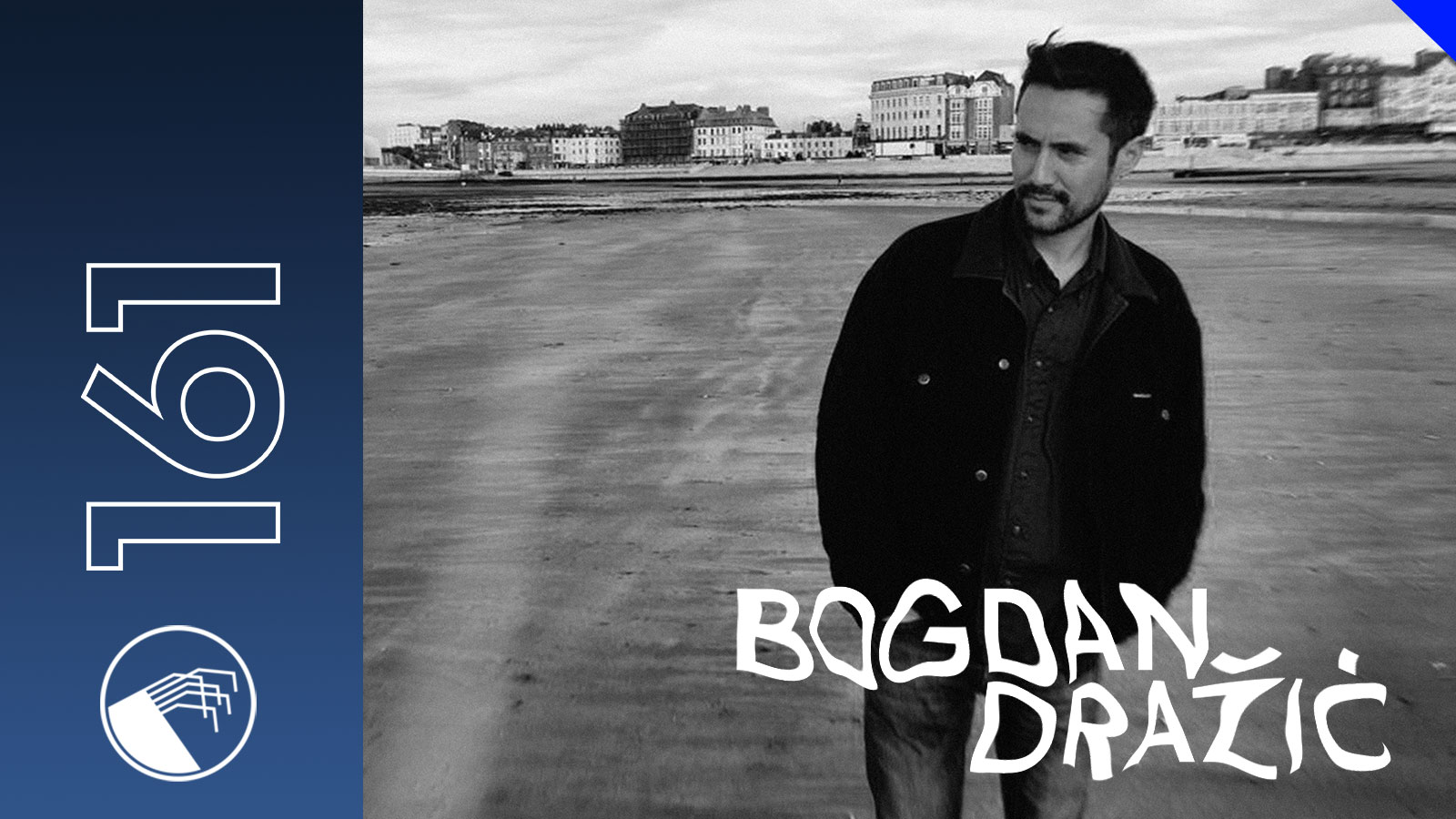 For this DT podcast we turn to Londoner Bogdan Dražić, south river dweller and heartbreaking mischief maker with a drive to fuck up beats. With releases on Giallo Disco and a colourful EP on The Trilogy Tapes Dražić is a name to keep an ear on. Dražić took the time and energy to fashion some text based symbolism for us, ordering the glyphs in such a way information about what he does and why flows into that small, conscious part of your brain you believe to be your self, lighting little candles of awareness along the way:

DT: Hi Bogdan, thanks for taking the time to talk to us. Can you tell us a little bit about yourself, who is Bogdan Dražić and how did you end up in London?

BD: I’m actually London born, and apart from a seven-month stint in South America, I’ve pretty much been landlocked in London with no hope of getting out. The Bogdan Dražić name is an alter ego that feels more inline with the music I want to make, and the man I want to be. Maybe it’s my love for Soviet sci-fi and graphic design, but the name resonates with me. Cultural appropriation aside, Bogdan Dražić is also a fictional character from the 90s Australian teen drama ‘Heartbreak High.’ Generally referred to as ‘Draž,’ his full name has slowly become lost over the years. The added accents are a bit of a red herring (I’m a sucker for typographic flourishes). I enjoy laying traps and watching people take the bait.

DT: You help to promote a night called GDANSE! Do you have any previous experience programming events and what do you see as the goals of GDANSE! ?

BD: It all kicked off with my first release on Giallo Disco. I’d been toying with the idea of putting on nights for a while, but there was so much going on at the time, party-wise, that I couldn’t see a place for it – yet. A first record seemed like a good place to start, so I put on Black Gloves, a one-off party with Antoni Maiovvi and Vercetti Technicolor. It was a good opportunity to meet the guys and cut my teeth on the party circuit. After that, it was back to the drawing board. I already had GDANSE! planned as a name. All I needed was a venue, and I mean a proper venue. Something dirty and industrial. I got to know some people in and around the South London scene and boom, GDANSE! was go. Good music, nice vibes, that was the goal. Nothing radical, I just wanted to make my own contribution to the emergent South London scene. For the greater good, you know.

DT: In a scene predominantly swathed in black your music has a defiantly playful left-field edge to it. Where do you think this mischievous approach comes from?

BD: Ha, good question. I have a bit of history, so am no stranger to mischief. Nothing too extreme, but before the tunes there was graffiti, and all the cheek that comes with it. My music is an extension of that attitude, but vandalising beats instead of streets. The middle-finger sentiment remains the same though. Wherever you are, there is always a cosy establishment that needs to be challenged. The music industry is no different.

DT: When did you start producing music and what were your motivations for doing so?

BD: I was a bit late to the party, around 2012 I think. While studying for a Masters degree in graphic design, I noticed an ad for an evening course in music production. I thought why not and signed up. I have always been driven to seek out music in one form or another. Vinyl, books, CDs, videotapes, DVDs – anything without a pulse. However, with no musical background, music production seemed inaccessible and out of reach. The evening course was motivational more than anything. It got me going and made me realise how easy it was.

DT: In May 2018 your music found a release on Will Bankhead’s Trilogy Tapes with the Dangnabbit E.P. How did this come about, and what did it feel like to have your music released on such a fantastic label?

BD: At the time of finishing, Dangnabbit was an untitled EP. I felt I had made some of my best work but knew it was a bit oddball. I couldn’t really think of a label that would put the music out. I sent it out as a loose set of tracks, mostly to ’name’ labels, receiving little or no interest. This was quite demoralising as it made me question my work, the time I spent making it, its value etc. We’ve all been there I’m sure. I then took a punt on TTT. Within minutes, Will got back to me with a big thumbs up. It turns out we have a lot of mutual friends. And being London-based makes the label feel like home.

DT: Can you name a producer who in your opinion we absolutely must be paying attention to in 2019 and why?

BD: Honestly, I’m the wrong person to ask. I’m still digging in the past, can’t get beyond the mid-nineties! Having said that, I’m currently vibing off Patricia Kokett’s stuff. Emotive slowed-down trance and psychedelic electronics. Music for the body and the mind. How can you say no.

DT: London has a famously vibrant electronic music scene that reaches back decades. How do you gauge the health of the London scene today? Do you think the city is still as confident and cutting edge as its reputation suggests?

BD: On the surface, no. But underground, yes. In my experience it’s been the South London scene that feels the most vibrant. Beginning with World Unknown (specifically the arch era in Loughborough Junction, around 2010), the South London scene has flourished, mostly in and around the Bermondsey area, with independent venues like Unit 18, Penarth Centre, and The Rising Sun leading the charge. It’s also worth mentioning FOLD, a new 24-hour venue in East London, pushing the underground but on a much larger scale. For me, this is where the action is happening but I’m sure there are other nooks and crannies that I don’t know about.

DT: Beyond your own events, if there was one party in London we should be attending, which one is it?

BD: If you’d asked me six years ago, I’d straight-up say World Unknown, Body Hammer, PUWABA, Fieldwork. Each party had its own vibe while collectively feeling part of the same scene. This was down to the community. Strangers became regulars turned friends, providing the formative years of what I do today. Now, it’s a tough one to call. It has a lot to do with the venue. World Unknown had it good with the arch (not to mention a couple of great Bermondsey spaces). PUWABA and Fieldwork shared The Grosvenor, a great pub with a little function room full of undeniable charm. These venues are sadly gone now, their temporary nature being what made them special. Today, it’s the infamous Unit 18, my second home (well for GDANSE! at least, ha). It’s a legit party space but with a rugged industrial vibe and a wicked crew. Unit 18 stands alone in its anything-goes attitude, allowing parties to own the space. You can dress it, alter it, equip it, any which way you like. It hosts a number of great local parties (Body Motion, Inner Totality, Electric Sweat to name a few). Attendance is a definite must.

DT: If you could have your music released on any label, past or present which one would it be and why?

BT: That’s a tricky one. So many options! Independent labels like Irdial Discs spring to mind. Established in 88/89 and still sounding fresh. Proper experimental, genre-bending electronic music, and pretty much by one man, Akin O. Fernandez. Irdial operated on the fringes of what a record label should be. It explored sound in a wider context, through side-projects like the ‘Conet Project: Recordings of Shortwave Numbers Stations,’ a series of strange radio transmissions intended for spies. Anyway, the key point here is attitude, and I intend to have the same approach to GDANSE!

DT: Can you tell us about any new projects or releases that you have coming up?

BT: Yeah. GDANSE! will be branching out into record label territory. I want to build a publishing platform that involves every facet of the party – the music, art, design, and writing. A record label is the obvious way to go. I’ll be launching it with a self-release, which I’ve been sitting on for ages. I’m also working on a couple of EP ideas that are almost ready, not to mention the next TTT release. Aside from that, the eternal struggle continues.