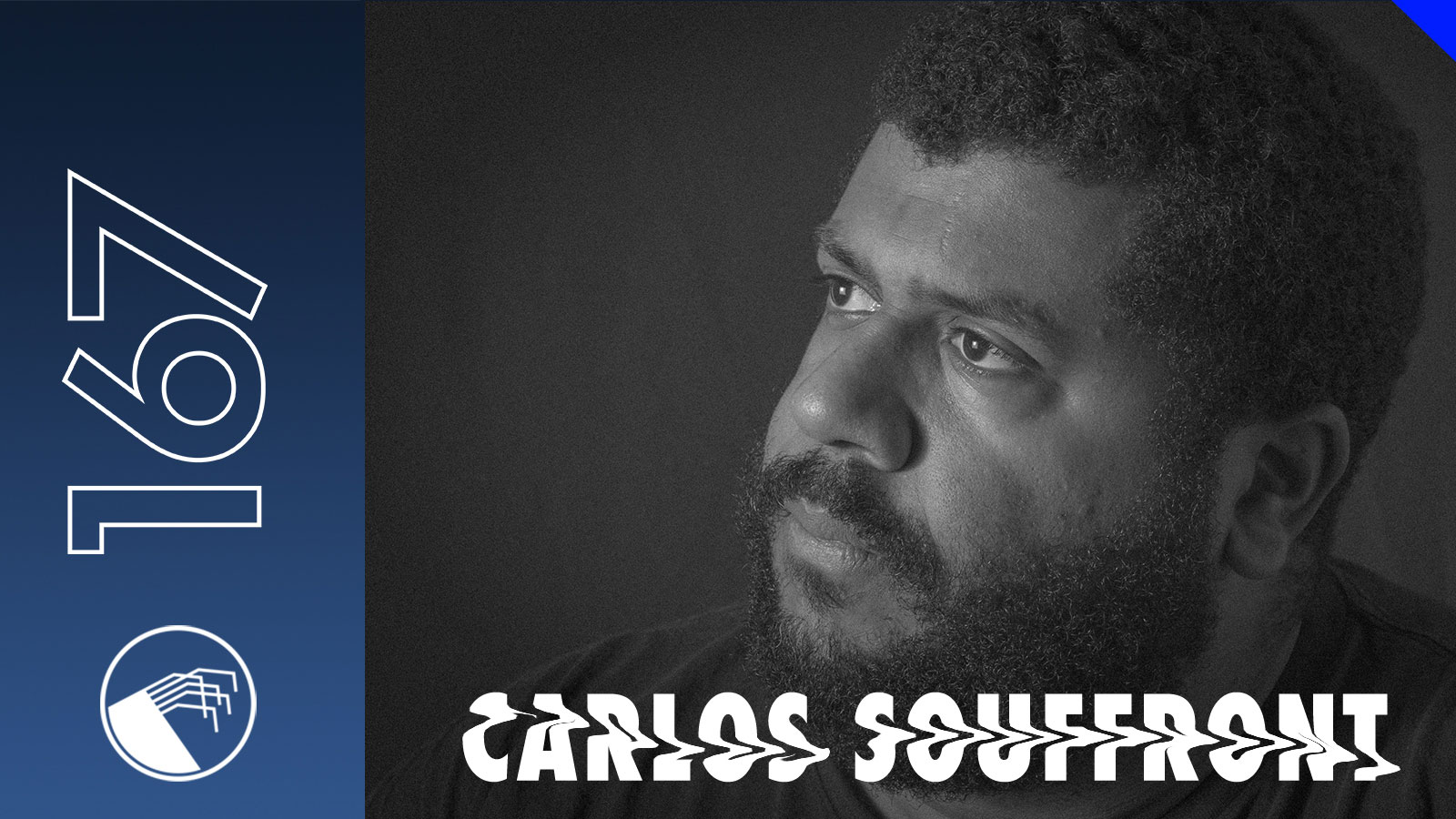 San Francisco based since 2011, Carlos Souffront has been wowing crowds with his profound love of music, adventurous selections and creative and thoughtful approach to DJing since the mid 1990s. Renowned as a DJs DJ Souffront gained his first residency in ‘95 at Zoot’s Coffeehouse in Detroit and has gone on to be closely associated with a number of legendary US parties including Interdimensional Transmissions’ infamous No Way Back events, The Bunker in New York and San Francisco’s Honey Soundsystem. Proclamations visible on The Internet name Souffront as possessing the greatest collection of acid records on the planet whilst The Bunker’s Derek Plaslaiko states that Souffront is the greatest DJ in the solar system. So, for our latest podcast we’re undoubtedly in very good hands indeed. We managed to share some words with Carlos about his current modus operandi, his style of DJing and how he’s managed to keep it fresh from those first humble beginnings in Detroit city through to today.

DT: Hi Carlos, there’s not so much information available on the internet as to what you’ve been up to recently. Could you give us an overview of where you’re at right now as a DJ? Do you have any residencies you’re currently holding for example?

CS: Hi Digital Tsunami, thanks for having me! Well PHEW!! It's a relief to know (or at least believe) the internet isn't currently sharing everything about my day to day life… Yet. These days I've been challenging myself to be more selective with my choices of where and what I play, committing to a more radically personal expression. Asking for forgiveness instead of permission, you could say.
A few folks know I made the decision to pull out of playing the No Way Back party last year. That choice wasn't made out of any hard feelings, but more from this impulse to push myself to keep changing lanes and do different things with different people, regardless of the choice's impact upon any notions of DJ "careering." As for the residency thing, it is intentional that I do not hold one in my hometown. My reasoning is that I already have this great and frequent fortune to play in other cities, I'd rather not be that greedy asshole hogging the local scene as well! Plus, this way, I avoid burning out and get to enjoy and find inspiration from the massive pool of local talent.

DT: You’re a DJ who’s famed for being able to incorporate a variety of styles in his mixes. In the podcast you’ve created for us you move from techno and industrial to hip-hop and what sounds like an intriguing piece of Dutch New Wave. Where do you think this colourful approach to building your sets comes from?

CS: This addled brain, I suppose. I believe, like any art or craft, that DJing is a singular expression of the individual. This colorful approach you note simply reflects my colorful character. Also, I enjoy lots of different kinds of music. When I approach playing a set I take inspiration from the specific character of some track I currently have a crush on, then create sonic links to other pieces of music. I'm trying to outline a sort of micro-genre within each set. It's hard to make it new every single time, and I do wind up relying on my personal canon of reliable “comfort zone” tracks, but making it new and mine is always the main goal. From my perspective, the quality of my sets relate most closely to how well I succeed in conveying that particular musical shape through my selections.

DT: Could you give us an insight into this particular podcast you’ve created for us? What was your aim with the mix and could you say a little about why you decided to choose these particular records?

CS: As I mentioned before, the sound of my mixes builds upon specific tracks that I'm really into at the moment. The past six months I've had encounters with several friends whose music inspires me and mines a similar style of gritty underground techno. Their work represents one style of contemporary music that I just think sounds really good, so I wanted to showcase that to honor my friends and their influence upon me.

DT: Do you think your style of DJing has developed over time and if so how do you think it has evolved? Has your approach to building a set or the pace of your transitions changed for example? Perhaps you find yourself playing significantly different types of records today than those you played ten years ago?

CS: There are probably some mixes of mine from the 90's that my older friends could use to blackmail me, but on the whole I believe I've maintained a certain rigor for selecting music that transcends the time in which it was made. My pacing has probably grown even more frenzied over the years, I think. For example, in the rare instances that I've had to analyze my own mixes for release, I've noticed that I consistently play about 24 tracks per hour. This mix is closer to 26. So there! For better or worse, I've almost completely given up any semblance of set linearity in exchange for a more dynamic and personal expression.

DT: Could you share with us a few of the essential records that have not left your bag over the past six months? What is about these particular records that you find so interesting and attractive?

CS: The records that haven't left my bag over the past six months have usually been there for 20+ years! One example would be DBX "Electric Shock." It ticks so many boxes for me. First, it's fun and easy to mix so it boosts my confidence when my nerves are still getting the better of me early on in a set. Second, it operates at the preferred energy level for my danciest sets (i.e. "let's fucking GO bitches!"). Next, it perfectly contextualizes me within a musical tradition. Lastly, it's funky as they come and you can't fake the funk.

DT: You’ve been DJing commercially for over twenty years, beginning with your residency at Zoot’s Coffeehouse in Detroit in 1995. With your experience you’re uniquely placed to be able to comment on developments in dance music culture. If you were to survey the electronic music scene from the ‘90s through to today what are the major changes and developments that stand out in your mind?

CS: I don't claim to be an authority on sociological shifts in dance culture. Plus, I abhor any notions about and would argue against the very existence of, "the Scene". I am very much an outsider and always have been. I like what I like, do what I do, roll with the freaks I've always rolled with, and ignore most everything else. While I didn't predict the scale of popularity electronic dance music is currently experiencing, it’s not surprisingly, just as vulgar as the dominant culture's soundtrack has ever been.

DT: You play at parties all over the world with bookings every weekend. Can you give us any insight into how you manage to keep it fresh and exciting week after week?

CS: Frankly, I just work really fucking hard at it without taking any of it too seriously. I spend a LOT of time selecting music to reflect where I am at the given moment, while maintaining a certain level of respect for my hosts' audiences. Also, since I keep a day job that secures me my basic needs, I'm able to put all of what I earn DJ'ing right back into buying more music to inspire new ideas for sets.

DT: You once collaborated with Detroit electro legends Ectomorph and were credited as being involved with their label, Interdimensional Transmissions. Do you still work as a producer and can we expect any Carlos Souffront releases in the future?

CS: Don't hold your breath! I've never been a producer, my production "credits" are really just collaborations with producer friends, which is something I've always done and will continue to do.
Recently though, Bill Converse and Dark Entries did me the honor of releasing a track on his latest LP that features my vocal. The track came out of a pet project where a buddy recorded my vocal and I sent it to a handful of people to use (or ignore) as they saw fit. Bill, being the good sport he is, was the first to oblige me, though other people's takes are perhaps still on the horizon.
In fact, the tracks that bookend this mix are products of another pet project where I asked friends to sample this YouTube video that segues several occurrences of Shelley Duvall introducing herself on a TV program. I cheekily gave my friends a 2 week time limit to put something together for me to play. To my extreme delight, on day 14, Bill delivered no less than 150 minutes worth of music rinsing this sample repeating "Hello, I'm Shelley Duvall!" The end product will eventually be a vinyl pressing I'll distribute privately.

DT: Post-punk and specifically New Wave are not musical forms that have been traditionally associated with dominant narratives of house and techno history. Disco, Chicago and Detroit usually take precedence with Belgian New Beat and EBM making a brief appearance before the narrative segues into acid house and UK hardcore. Obviously over the past several years this telling of dance music history has been undergoing something of a revision. Do you have any opinions on the relationship between post-punk and New Wave and their importance to the development of house and techno and the nebulae of musical forms they went on to spawn?

CS: I think the typical "bedroom studio" format of underground house and techno comes from what are basically punk ideas; formal music training be damned, use what's cheap and available, and do it yourself.
Another idea, not necessarily born of punk but gaining resonance there is this idea that your expression has an essence of your physical geography as much as your psychic geography in that you are engaging in your local culture, that your local culture and work shape each other.

DT: We like to shed light upcoming artists, DJs and producers, its a topic we approach all our guests with. You must interact with many young, up and coming DJs on the US scene we have yet to hear about over here in Europe. Are there any particular DJs or producers that have stood out for you on your travels recently that you would like to share with us? Could you explain why you find these particular artists interesting?

CT: Through my life's passion, I do come across many, many individuals whose work is inspired and inspiring. What unites them, to my mind, is an urgent and rigorous commitment to individualism with a secondary regard to its potential for acclaim. While I sincerely appreciate your efforts to shed light on new artists (after all, I'm benefiting from your gracious attention right now, thank you very much), I must respectfully decline naming names. There are so many that I couldn't help but forget some, which would make me and the forgotten ones feel bad. Furthermore, l don't claim to know who you do or do not already know. However, if you or someone in your audience were to look at my friends list on social media, you would find that easily 50% of them are talented artists in some medium. I find each of them pretty damned interesting.

DT: What developments can we expect from Carlos Souffront in the near future? Please let us in on your upcoming plans and endeavours.

CS: My future sharing music with the public is in the hands of my audience. Let's ask them!