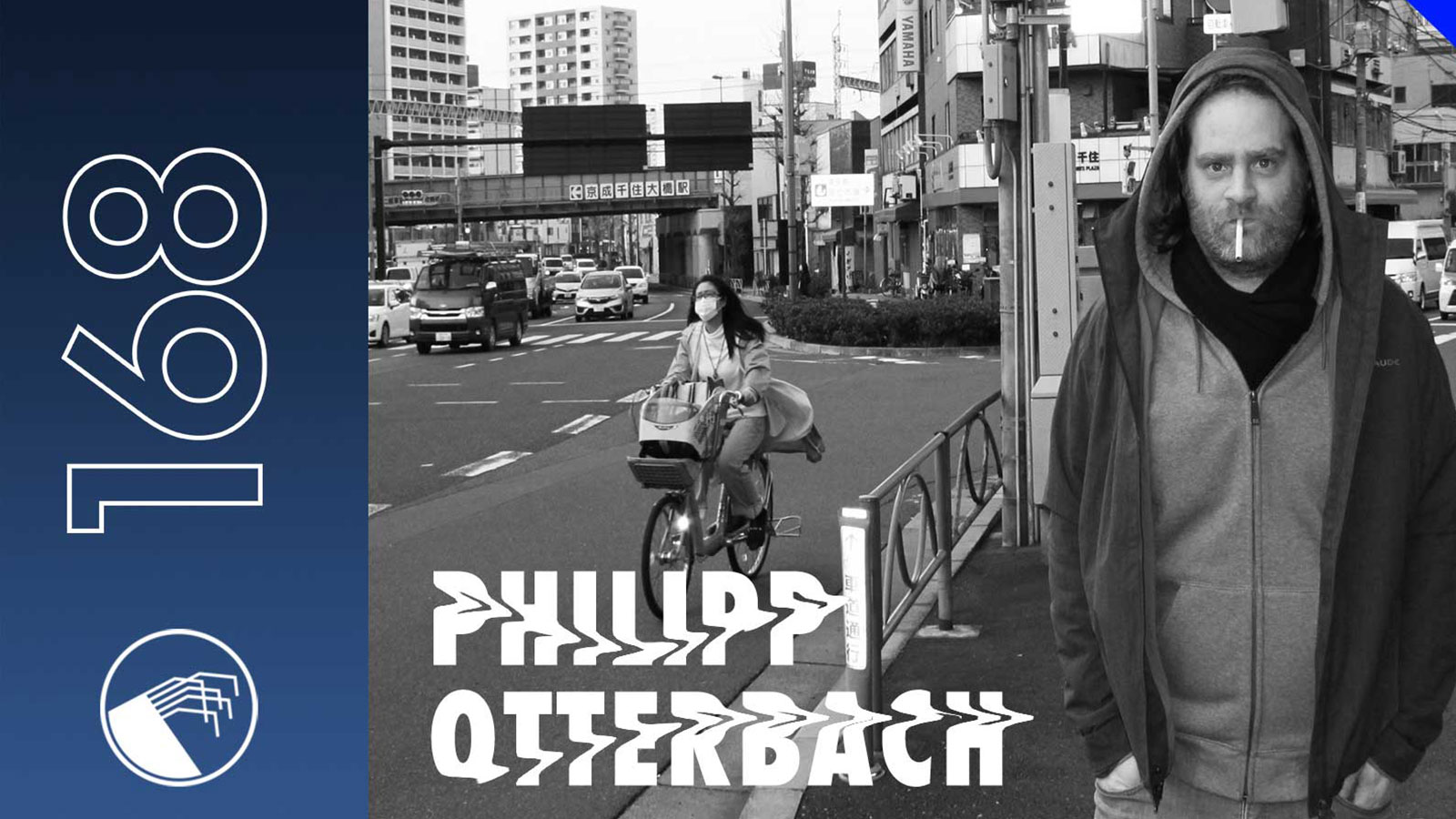 Philipp Otterbach is a man who likes to collect, collate and construct sound, refracting experiences into deep pulsing resonances. One of the earliest residents of Düsseldorf's infamous Salon des Amateurs way back in 2004, Philipp ran the Substance parties with Vladimir Ivkovic for many years. His organic, idiosyncratic sound was subsequently found pressed to black plastic on Essen’s Grokenberger Records and, a little later, The Hague’s Tour Messier label with his latest release finding the light on DT fave Knekelhuis. These days Philipp might be found behind the decks of a party in Berlin, such as the Griessmuehle or ://about blank and will be joining the DT crew at DT Camp this August. We stole some time with Philipp to talk about his work, his sound and his upcoming projects and releases.

DT: Hi Philipp, thanks for taking the time to talk to us. Could you give us a little insight into what you’ve been up to recently please? What are your main project(s) right now?

Philipp Otterbach: Thanks for having me. Obviously I’m producing new music and have the pleasure to be invited to play my records and meet amazing people. I am very thankful for this.

I re-organized myself a bit over the last two years. My main job as a creative director is very important for me to keep the balance, but working full time, part time at the Record Loft, producing music, DJing and trying to be a social otter – it all became too much. So I reduced my working hours a bit and quit some other stuff.

Even though there is more going on these days I have the feeling I’m more focused and relaxed, which is also maybe a thankful sign of getting older.

DT: Over the course of your releases your sound has remained consistent: mysterious, dark, understated, tribal, organic; existing somewhere outside of standard time and space. Did you have a firm idea of the sound you wanted to achieve when you began producing?

PO: It happened naturally. My tracks just happen on a gut level and arrive to me intuitively. I have the feeling the music I create is honest in its own way. We are all music lovers and I’m also attached to music I heard from my childhood till now. In my case it might be an overload of guitar music from wild sixties stuff to weird nineties indie stuff till today, this is basically half of my record collection. This might also explain why I am more into song structures rather than using loops.

DT: Once you began creating music, how long did it take you to achieve the sound you were looking for?

PO: Quite some time. I always created this more moody stuff right from the beginning, since around maybe 2003. I still use segments and sounds from my early productions, the beat on Roamer Pt 1 [B2 on 2019’s The Rest is Bliss EP] was created around maybe 2005-2006. Even though I felt these early tracks were simply not that good (of course not!). I kept on producing this stuff but never really showed it to anyone. I wasn’t really confident with it.

The gentle guys from Syncom Data were some of the first people to hear what I had written after the stuff on Grokenberger and they were risky enough to even start a new label [Tour Messier]. So yes, it took some time to become simply better but its basically the same music.

DT: Between your last release on Grokenberger Records and your 2018 release ‘Humans’ on Syncom Data’s Tour Messier label there is a gap of three years. Whilst there is clearly an aesthetic continuation between the two periods, the sound exhibited on your later work feels wider, deeper, more immersive and enveloping. Did you change your style of production, the machines you use or hit upon some artistic arousal between the two releases?

PO: All of the Tracks on Grokenberger and Tour Messier were basically sketched and produced at the same time while i was living in a tiny room in Bushwick, NYC. It was a very inspiring and wild time, but it was also very productive and a little bit disconnected. It was the perfect setup!

Production wise nothing really changed. I am simply not the cool hardware guy like many pretend to be. I still miss some basic features in Ableton, but I do not care. I had some drum machines, Juno´s and a Roland Space Echo, but its not important, (except maybe for the Space Echo...). I used my Mutable Elements modal synthesizer a lot on the Rest is Bliss EP and I recently bought a Roland SPD sampling pad, which is amazing and makes sense to me since I was drumming a bit in my youth.

DT: The Rest is Bliss EP is on a firm DT favourite: Amsterdam’s Knekelhuis Records and is your most recent release. Can you give us some information on how the record came to be on the label? Did you know Mark van de Maat personally before the release for example?

PO: Mark and I were supposed to meet a few years ago through a mutual friend, but they were unable to get in the club where I was playing, haha. Mark stumbled over my Humans EP, got in touch and invited me for an extended back to back Session at Garage Noord in Amsterdam, which was a truly amazing night to remember.

DT: Why did you feel Knekelhuis was a suitable home for your work?

PO: A lot of labels in these days seem to be very limited to a certain sound, even if its more experimental stuff. This stands in a contrast to some of my favourite records which contain guitar stuff, techno and IDM even on the one release.

Mark is very open minded to a wide spectrum of music and he takes the risk to release different stuff which I really like. Also his approach to working on a release really clicked with me. No boundaries artistic wise, simply friendly and very, very focused. I learned a lot and it felt very organic. Other labels might have problems to beat this experience in the future.

DT: Are there any producers that you look up to and have influenced your own music? Perhaps you could tell us a little bit about them and why you feel they’re special?

PO: Where to start… I’ll just grab some records from a pile behind me: Transmission by Cop Shoot Cop, Stinger by Pete Concrete and the Bootstrapping 1.1 Sampler on Eat Concrete, Biogen´s Stream on Thule and two Butthole Surfers records which are essential to me.

DT: Even ten years ago you could see a DJ and be reasonably certain they would play ‘in genre’ for the most part of their set. These days, eclecticism seems far more widespread, with DJs selecting music from all over the musical cosmos. If If you agree with this synopsis, how much do you think the DJs of Salon des Amateurs contributed to this development?

PO: I really can´t tell. I’ve heard good and bad DJs playing in genre or switching styles constantly for the most part of their sets since ten years and more. Playing slow or playing fast, with records, USB or a triangle, and I’m including myself here.

Maybe the listening habits from the audience changed a bit which is also the hard and risky work of some clubs and organisers to present their idea of an evening and artists they like. So its of course the work of the Salon Team and Detlef Weinrich as a host, DJ and producer to believe in this special room in Düsseldorf. This doesn’t happen that often, but its already happened in other places and will happen hopefully somewhere else in the future too.

DT: If you could DJ anywhere at all in time or space, where would you choose and why?

PO: It would simply never happen. But I am thankful for the present good (and bad) experiences. From a weird bar in Berlin playing seven hours of guitar music to empty clubs and surprising evenings where everything comes together.

DT: Can you tell us something about this mix you have created for us? Was there a particular idea guiding the mix for example? Perhaps you could pick out a record or two and let us what they mean to you and why you chose to include them?

PO: Just tracks that I always loved combined with some skips and mistakes whilst mixing. There are certain and more recent tracks that set the tone for this mix and that are also very inspiring for my own productions. The mighty blues “Der müde Tod” by Herr Bocksrucker; the forward thinking grooves by Ghostride The Drift; or the surprising “Hp Dub” by Transonic Flow. This last one is a project by Koloman Trax, he passed me record over the counter at the amazing Tactile Record Store in Frankfurt.

DT: Finally, please let us know if there's anything you would like to draw our attention to now or in the near future. Perhaps you’re releasing another record or have a particular event coming up you would like us to know about?

PO: A seven inch on Themes for Great Cities will be arriving really soon under the name of Grand Optimist. Its a project where I invite different people and samples which ends more in a typical band situation. I’m also finishing a remix for Wolf Müller & Niklas Wandt and I have another one for the friendly AM Kahmsaa on a label called ‘Light Of Other Days’ from Switzerland. I have more stuff planned but I try to keep it neatly arranged.

I had a human spoiler in Berlin recently meeting Elena Sizova & Ernestas and it felt otterly amazing. So I am really curious and happy to join the DT Camp family this year!