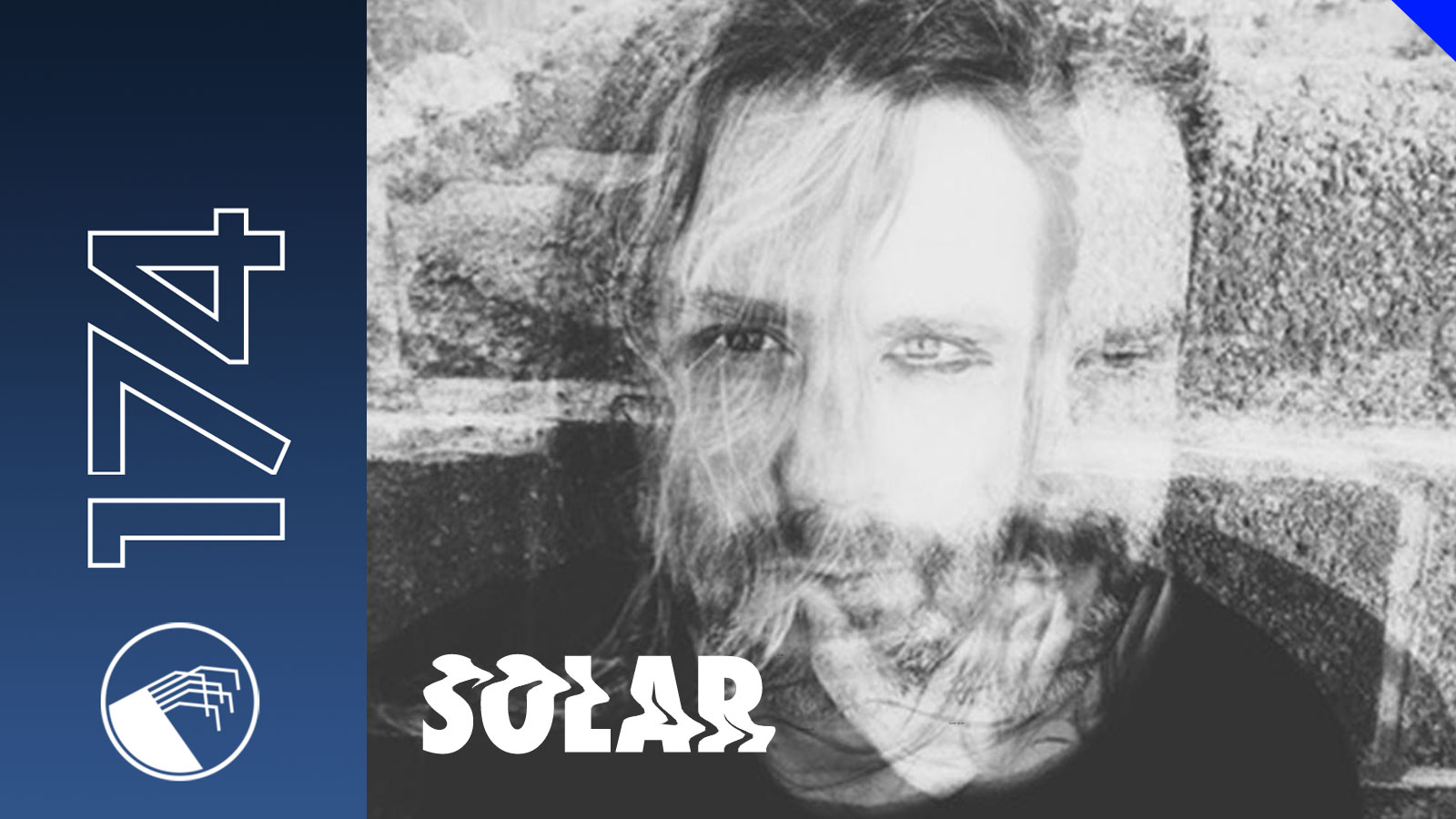 Solar Langevin is something of an underground hero in his native San Francisco, a hard working DJ, promoter and label boss who has spent many years supporting his local scene. Back in 1994 Solar, alongside friends Galen & J Bird, began the Sunset Sound System parties and has managed to keep up a contribution to San Francisco night life ever since. In 2014 Solar achieved international recognition via Amsterdam’s Dekmantel with invitations to play in Europe and since then has witnessed his visibility on the international stage increase. Solar has submitted a colourful and distinctive podcast for us featuring a wide array of sonic fractals blended together in a unique kaleidoscope of sound. We’re proud to be able present the work of someone who has worked hard for so long for something they love. In the short interview that follows we managed to share a few words with Solar about his work and why he does what he does:

DT: You have been active in the dance music underground for over two and a half decades now, what is it that keeps pushing you to be involved, to keep working with music and the people associated with it?

Solar: The music, friendships and community would be the main things that inspire me to stay involved in the scene. At this point I have spent most of my life doing it and it’s what I know best. I didn’t start playing internationally until 2014 and this opened up a whole new world for me in the underground dance music community, seeing how other people organize events and celebrate. Coming from the States you always hear the US referred to as “The Land of the Free”, but traveling throughout Europe it definitely starts to feel the exact opposite.

DT: Between the early nineties and now what do you feel have been the biggest changes to have occurred within or affected underground dance music as you understand it?

Solar: In the States after the rave scene exploded there was a big push to try criminalize it with a bunch of busts, propaganda and new laws. Everything moved into clubs which already had their strict drinking age laws and curfews. This kind of killed the original spirit from those early days where there was more of that sense of freedom. Eventually people get bored with this and wanted to create something with more meaning. Nowadays you are seeing events evolving from the club experience to setting up spaces in unique settings whether it’s a warehouse rave in Brooklyn, an old bath house in Pittsburgh, or a campout of a few hundred to a thousand people scattered throughout the forests of America. People are becoming more creative in their ideas of how to organize events and in turn these type of events help to strengthen that original community spirit and inspire people to come up with fresher ideas.

DT: You started your label Squirrels On Film in 2017, is this the first time you have been involved with a label, or do you have previous experience releasing records?


Solar: Squirrels on Film is the first and only label I have ever ran/owned (along with Brian Hock aka C.L.A.W.S. of course!). I released a track under the All The Wild Eyes alias just before we started our own label on a compilation called Concept 12:10 curated by Traxx and June on June Records which was a collaboration between June Records, Nation and We Are Monsters.

DT: Are you operating according to any particular raison d'etre with Squirrels On Film? I notice many of the artists on the label are San Francisco natives, do you purposely seek to highlight SF artists and producers for example?

Solar: When Brian and I first starting talking about the label together, we didn’t really have any particular raison d’être so to speak. We were both looking to create a label to have total freedom to release whatever we were digging without having to worry about what was hip or trendy at that moment. We obviously did not get into it to make any money, we just desired a place where we could release our own music and music from friends and peers. That naturally opened up an avenue for our friends in San Francisco/Bay Area that were making tracks and looking for a place to release them. We also have releases from an artist in Florida and two different Mexican artists whom are both currently living in Europe, so we are by no means an exclusively San Francisco/Bay Area label. That being said, we want to support the scene here as much as possible and want to release as much as we can from our friends and peers here that are making some freaky shit!

DT: Are there any particular record labels you’re really enjoying right now? Perhaps you could share them with us and let us know why you find their output interesting?

Solar: There seems to be an endless amount of cool releases coming out either through friends sending or digging around on Bandcamp and Discogs. I find it hard to even keep up these days! It is inspiring to see such a huge DIY culture releasing through all different medias from tape culture, vinyl and digital. This is always a tough question as you want to support all your friends/peers that are inspiring you, but eventually I forget someone and, then feel bummed. If you hear me play or listen to my mixes I am always playing the labels and artists which I find inspiring and influential.

DT: After twenty five years is there a core group of people that you find yourself working with in San Francisco or do you work with different people from time to time? Perhaps you could tell us a little bit about the individuals you look up to and rely on when it comes to organizing parties and releasing records?

Solar: From the very beginning through to the present I have been a part of Sunset Sound System which has been going now for over a quarter-century. Galen, J-Bird and myself have been the core of our crew over most of that time. It has been quite a long time to be in a relationship of any kind and we have really grown up together as brothers. Over time we started to develop our own different tastes of what we were feeling musically and aesthetically, and eventually I needed to find other outlets to present the more eclectic stuff I was getting into which brought me to throwing events with Mozhgan and Jason Greer for We Are Monsters, and the Hostile Ambient Takeover events I was doing with Brian Hock and Tasho. Sunset was mostly house/techno based, WAM was more eclectic and darker and HAT was more noise, drone, live based. All of the people mentioned above have been a big influence and inspiration working with creatively and I look up to all of them.

DT: Reading previous interviews you have mentioned the changing nature of San Francisco, gentrification and how this affects music scenes. People will often discuss culture, artists and equipment but how important do you feel actual space is to underground dance music and its continuation?

Solar: Obviously a safe space! We all learned a very hard lesson here about the importance of this. I believe a safe place goes beyond just physical safety though. Of course you want good, kind security that does not tolerate harassment or prejudices of any kind, but you also want a safe place mentally where people can be expressive and lose themselves in those moments. For this to happen, people need to push themselves to be more imaginative. It’s always a pleasure to walk into a Honey Soundsystem party where each event looks totally different and instantly puts people in a good mood seeing all the creativity that was put into it.

DT: I really enjoyed the mix you made for us, its a real journey, thank you. Was there any idea or guiding principle behind the selection?

Solar: Thank you! Was a true honor to do a mix for DT! Like most mixes I make, I usually find one record that I know I want to be on there for whatever reason and kind of take it from there. This one was a bit tricky as the first track I wanted to use was around 74 bpm, so I had to listen to a lot of records trying to find others that would match the tempo. In the end it was quite fun as I could mix up things that were double-time giving me room to go from the more heady and moody to the more up beat, weirdo punk stuff that I knew I wanted to represent for this mix.

DT: I understand your first love is DJing and vinyl in particular. Do you think there is a particular Solar approach or style? What do you think are the qualities or quirks that define you as a DJ, what makes you unique?

Solar: I would say these days I enjoy working in the studio as much as DJing. I am mostly playing digital when on the road mainly because of all the stress of bringing vinyl. Of course I still love playing vinyl and I’m always collecting. I get asked often what type of stuff/style of music do I play and always find this tough one to answer as my tastes are quite varied from time to time. I guess that would be one of the quirks that defines me is that a set will never be just one genre or energy. I try to incorporate all the moods and emotions that I am feeling and that usually takes crossing many different genres.

DT: What are you looking forward to in 2020, and what might we expect from Solar Langevin?

Solar: Looking forward to my next run of dates starting at the end of this month. Mozhgan and I are doing most of them together which will be really fun. Excited for another year for the label and new releases from Chris Mitchell and LDY OSC hopefully in the first quarter. Our annual Sunset Sound System Campout in Belden Town. More We Are Monsters events. I really would love to have a solo E.P. out for 2020, so will definitely be working on that. Hoping for collaborations musically and with the parties. If we are lucky, a massive change in world wide consciousness, because otherwise we are fucked!