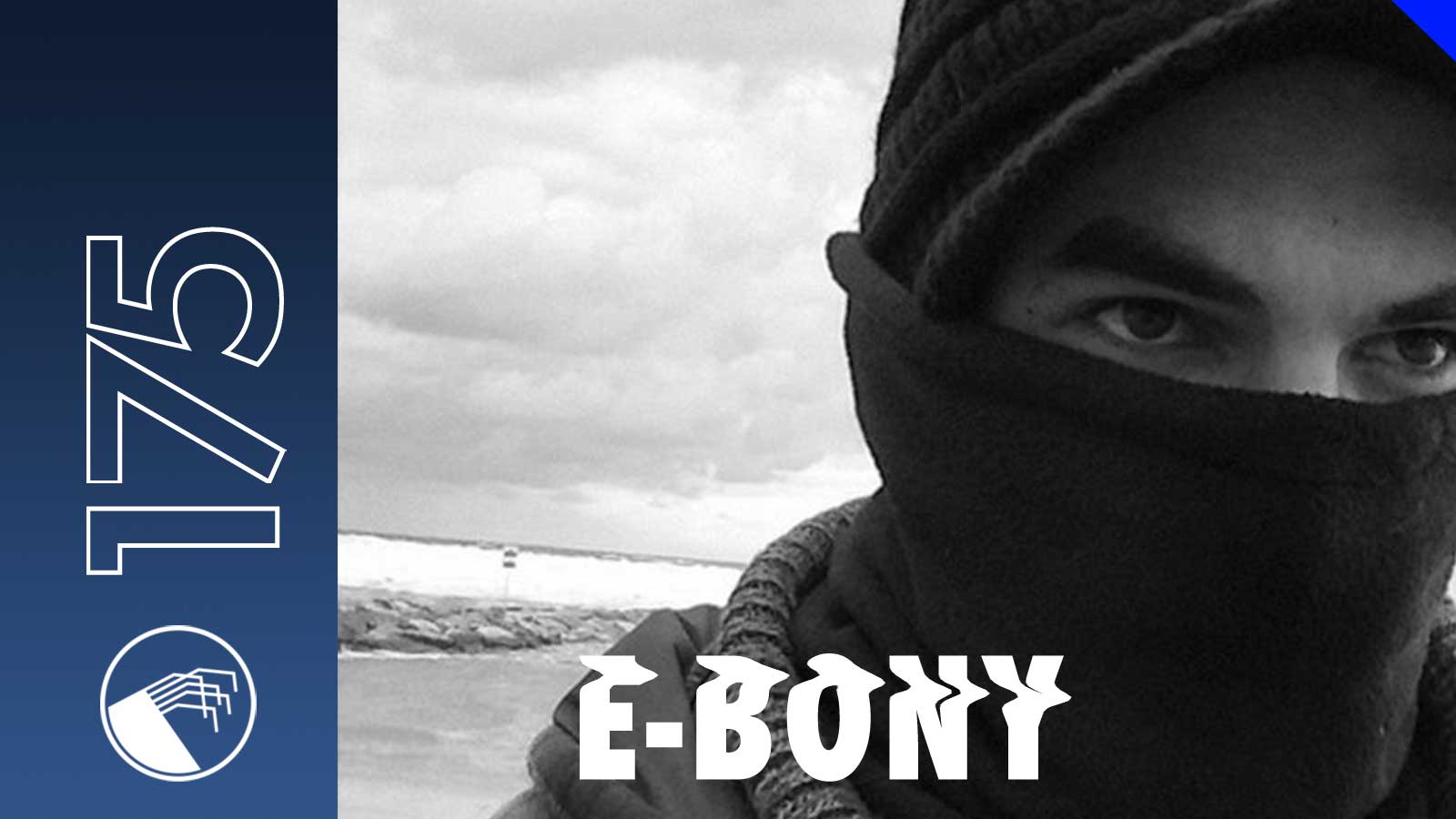 The latest DT podcast comes courtesy of E-Bony, Tel Aviv local and resident of the increasingly infamous Alphabet Club. An up and coming DJ and producer from Tel Aviv’s storied underground, E-BONY has found both release and sanctuary in the quantised rhythm of the electric drum and the communities that shelter beneath its aegis. Demonstrating a resourcefulness and determination bonded in the heat of passion E-Bony lets us in a little on his past and what drives him forward.

DT: Thanks for taking the time to talk to us. Could you tell us a little bit about yourself, what’s your background, where are you from?

E: I was born and raised in one of Tel-Aviv’s more challenging areas, a poor neighborhood where crime ruled. As a kid I had one option, to hang out with criminals which I did for a while and I am not proud of. As I grew up I discovered there are other choices however. This is when I was exposed to Tel-Aviv’s electronic music scene and since then I have been climbing toward the most passionate interest in my life: music, which has rapidly turned into my main career.

DT: Can you remember when music first made an impression on you? When you look back, which artists do you think have had the most influence on you?

E: The first time I came across music that really caught my attention was at the Barzilay club somewhere back around 2010, this was a club that stirs nostalgic memories for me. I was dedicated to the dance floor, mesmerized by so many great artists who left a huge mark on me and my musical tastes. I remember being fascinated by the power of the DJ and the ability to create such magical moments on the dance floor.

The artist who had the most influence on me is Broken English Club, I heard him playing a live performance for the first time at the Block and the morning after was one of the most creative days I ever had on my studio. BEC is a great influence for me on my own production.

DT: When was it that you started playing music for other people?

E: From the beginning I was playing at parties that I organised. The parties took place every two weeks in basements around the city. They started as small events where everyone knew each other, with time they became bigger but still everyone knew each other. To be honest we started doing our own parties because we didn’t have enough money for the high profile parties every weekend.

It’s been a long journey to playing the clubs in town and looking back I’m so grateful to have had the huge support I got along the way from people at clubs like The Block, Breakfast, E- boded, Barzilay and more. Thanks to venues such as this I find myself having a residency at Alphabet Club and PAG TLV today.

DT: Can you tell us a little bit about the Alphabet Club? What is it and how did you come to be involved?

E: I first became deeply involved with Alphabet in 2016 and I had an immediate connection with the club, it seemed to share the same desires and beliefs that I had. Alphabet is a place that brought something else to the local scene, a true sense of freedom and a space for everyone. Alphabet created a real community that followed a basic ‘rule’: you can do whatever you want as long as creating a safe space for all. Alphabet was the first club to give me a residency, which to date is the most significant title I have ever held. That position has helped to build so much of me as a DJ and has given me the opportunity to explore myself and the crowd each and every time I play.

One of the main parties at Alphabet is the infamous queer night, PAG TLV. The connection with the organisers and the party itself was immediate: the craziest nights and the sickest vibes hit me, boom, love at first sight. Last year was one of greatest times of my life as I joined forces with PAG TLV and became a resident, something that I always wanted. Now, because of PAG I get the opportunity to play for them around Europe.

DT: What do you think are the most important skills in a resident DJ?

E: Being a resident DJ means to be more aware. The work of a resident DJ is to perform almost on a weekly basis and this brings some complexities to the table. You must have the ability to create a ‘new’ vibe and reinvigorate yourself each and every time. This is challenging, but also very satisfying. In my opinion being a resident is like building a long term of a relationship with someone and getting to truly know their other side. In order to keep it burning you always have to find some new adventures.

DT: When you hear a tune, how do you know it will be one you use in your sets?

E: The only thing I do is to try imagine how the track will sound on the dance floor and how the crowed will react. I always have in mind the impact of each and every track, and if I believe the track follows my point of vision, I'm going for it.

DT: Can you tell us a bit about No Twins? What is this about?

E: No Twins is a project of myself and Tal Maman, a good friend who shares with me the passion for weird and broken beat stuff. This project allows us to bring to our sets something different than you might hear when we play alone.

DT: If you could go back in time and visit any club or club night from Mancuso’s The Loft to Chicago’s the Warehouse to Tresor at Leipziger Strasse or Steve Bicknell’s Lost parties (for example), which night do you think it might be and why?

E: As one who has deep roots on the local scene I would like to see myself continue the great legacy of the long history of the night life in Tel-Aviv. So many clubs and nights have made this tiny city into a must-visit place for so many people from all around. I wish I could see my self going back in time to the 1980s: the golden age of the city. I would love to have been able to visit legendary Tel Aviv clubs such as Allenby 58, Penguin, Roxen, the Colosseum were the hottest spots in town that brought the most eccentric content TLV has ever seen.

DT: How’s life for E-BONY in Tel Aviv right now? What should we know about the city that we don’t?

E: The cheapest street food is much better then restaurants :)

DT: What’s up coming for you? Is there anything you would like to tell us about?

E: My debut EP is gonna be released soon on Wrong Era (a sub label of Slow Motion). I’ll be playing on the next months at Pornceptual in Berlin, Verboten in London and Faggotery in Stockholm (with PAG TLV crew). More exciting announcements to be revealed soon!